When the Codorus Creek made like a river: Linked in with neat York County history stuff, April 12, 2012 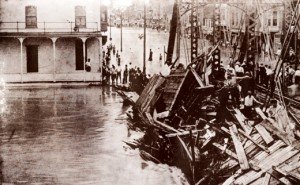 This was the scene at York’s West Market Street bridge in 1933 when ‘The Codorus made like a river.’ So says a Gazette and Daily calendar from 1970. The caption noted that this was the last and most famous of the Codorus floods. Such a flood would not happen again, the calendar opined, with the building of the Indian Rock flood control dam in the early 1940s. That dam ‘harnessed the temperamental stream against a repeat disaster.’ Well, two years later, in 1972, Tropical Storm Agnes repeated the disaster. The 40th anniversary of that storm, which took at least five lives, will come in late June. Also of interest: Tropical Storm Agnes produced Kreutz Creek library building 40 years ago. Read about it here.

A reader emailed with a good question:

Was there a Ford dealer in Manchester borough before  Beshore & Koller Ford?

The emailer’s information is that the first person to sell Ford cars in Manchester was a Jacob Rentzel.

“I don’t know if at the time it was a dealership or if some one could just sell the cars,” the emailer wrote. “This would  have been before the 1930’s when Beshore & Koller started. I know he had a business on the square of Manchester up till 1916.”

The emailer is asking for those with information to email: clock3231@aol.com or comment below.

Why Gettysburg? Rick Santorum ended his U.S. presidential bid in Gettysburg this week. Why did he choose that locale? The Hanover Evening Sun sought an answer.

Titanic coverage of the luxury liner’s sinking: Check out this ydr.com mashup of coverage – past and present – of the Titanic’s sinking 100 years ago.

Splinter-section?  That bad intersection at Church & Greenbrier in Manchester Township? How did that come about? Please comment below. 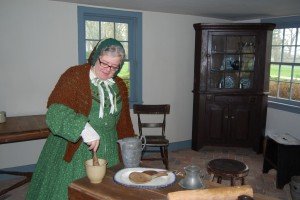 The National Shrine of Saint Elizabeth Ann Seton in Emmitsburg will host the National Museum of Civil War Medicine for Nursing a Nation Divided, a free family event about medical science during the Civil War. The event is set for this Saturday. Living historians will tell about how the Sisters and Daughters of Charity contributed to the war as nurses and advocates.  Details: www.setonheritage.org.