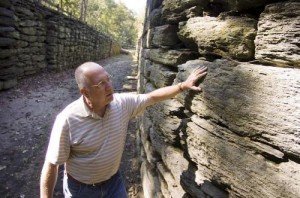 The Susquehanna Gateway Heritage Area sponsored a recent walk in the area of PPL’s Holtwood Environmental Preserve that includes Lock 12 of the old Susquehanna and Tidewater Canal. Mark Arbogast showed the schist rock that made up one of the rounded entries to the Lower Windsor Township lock. Interesting how the craftsmen made a round entry from boxy, rectangular rocks. How do you do that? The York Daily Record covered the tour of the mid-1800s canal system that ran alongside the Susquehanna River. Also of interest: Placid canal harmed Susquehanna River and Freedman kisses earth as canalboat crossed Mason-Dixon Line.

The other day, a letter to the editor writer created a first here at the York Daily Record/Sunday News.

Jackie Shrader, who handles letters to the editor in our newsroom, flagged the fact that we received, via Twitter, a letter proposed for publication in the newspaper.

Since tweets are limited to 140 characters, the message from York County resident Jason Epperson was brief with an attached link.

Such was the wonderful convergence of digital and print.

And interestingly, though our newsroom enjoys much interaction with the public via Twitter, Facebook and other social media, our abundant letters to the editor designated for the newspaper have remained, well, abundant.

And the fitting headline on the link attached to Jason’s tweet?

Composed on Jason’s iPhone, of course.

Business linked in to history: York-based business had a hand in MLK monument dedication

Event of the week:  Scott Mingus’ Cannonball blog sets up a gathering of Civil War fans: – Author Jim Morgan III featured at Oct. 19 meeting of the York Civil War Round Table: 150 year anniversary of the Battle of Ball’s Bluff.

Blog post of the day: Only York’s Joan Concilio has posted the clearest aerial view of a local scene that I’ve ever seen (it looks like a toy village): Church view from the air

Forum of the day: Over on the Exchange, Folks are really into products made, or once made, in York.