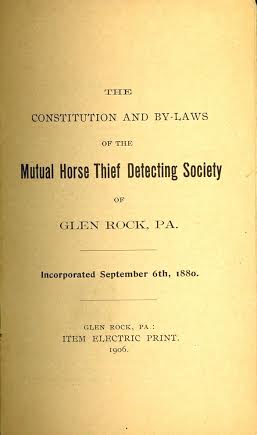 The Mutual Horse Thief Detecting Society of Glen Rock gathered for a meeting about 100 years ago – on Dec. 13, 1913. This image is an inside page from a copy of the group’s constitution in 1906. ‘It is amazing how much of the county this organization located in Glen Rock covered,’ the borough’s John ‘Otts’ Hufnagel wrote. Also of interest: Otts Hufnagel writes about Glen Rock’s first mill, aka, the Glen Rock Mill Inn.

When horses served as tractors and the primary means of transporting people in York County, holding onto horses was a major concern.

It would be akin to guarding against grand theft auto today.

It’s interesting, too, that the Mutual Horse Thief Detecting Society of Glen Rock was still meeting on December 6, 1913. The group  met at the Fountain Hotel, Glen Rock.

By then, motorized vehicles were becoming common on the region’s roads.

But this fiesty group was there, aiding residents in York County.

On October 18, 1879, a second meeting was held and the process to organize was initiated. A meeting was held in the Item hall on Hanover Street, composed of the members of the “Shrewsbury Horse Thief Detecting Society” which was organized in 1840. A committee had been appointed at the previous meeting to make the preliminary arrangements to secure a charter for the new society. The committee presented a constitution at the meeting, which was adopted, and N. Z. Seitz, Esq., was directed to secure a charter as speedily as possible.

The name of the Society hereafter will be “The Mutual Horse Thief Detecting Society of Glen Rock, Pa.” and its principal office shall be located in the borough of Glen Rock, County of York, and state of Pennsylvania. It was reported that the provisions of the constitution were such that if faithfully carried out, it would be almost impossible for a thief to escape from being detected. It was expected that the Society would grow rapidly when once fully organized

Any person residing in any of the following townships in the County of York, or in any of the boroughs surrounded by those townships, except the city of York, may become a member of the society by paying the admission fee provided for in the Constitution; and by complying with all other provisions of the Constitution and the By-laws of the Society. They are as follows: Shrewsbury, Codorus, Manheim, West Manheim, Heidelberg, North Codorus, Jackson, Manchester. West Manchester, Paradise, Dover, Conewago, Hellam, Spring Garden, York Twp., Windsor, Lower Windsor, Hopewell, Springfield, North Hopewell, East Hopewell and Springettsbury.

Each person on becoming a member shall pay an admission fee of $1.00, and at the same time 25 cents as dues. The dues must be paid annually at the annual meeting in December of each year, or within thirty days thereafter.

This group was very serious about meeting attendance by the board members. If a member of the Board of Managers shall absent himself from any of the regular meetings of the Board of Managers, unless on account of sickness of himself or members of his family, or death in the family he shall pay a fine of $1.00 for each and every absence.

Dues-paying members have responsibilities to report stolen mules, horses, mares and geldings in a timely manner to be eligible for compensation if the stolen animal was not recovered. Each member of the Board of Managers, as well as the President shall keep a book in which upon complaint being made by any member of the Society within eight hours after the discovery of the fact that a mule, horse, mare or gelding belonging to the complainant, was stolen from him, from his premises, or within the bounds of the Association, he shall describe the age, size, color, marks, or any other peculiarity to distinguish the same, with the declaration of the owner in the following manner to be entered in said book, and described by him, viz:”I do hereby declare and affirm that on the …..day of…..inst., at……o’clock, (stating as near as he can,) there was stolen from my premises, (or wherever it happened,) and (describing the animal,) that I verily believe said animal was stolen; that the said animal was taken away without my knowledge, consent, connivance or collusion, by some person or persons, to me unknown, and this declaration I make under penalty of forfeit of my honor, my good name and standing among men.” Witness my hand this ……. day of ……. A D ……. subscribed before ……. (Manager).

Upon the entering and signing of this declaration the President, or such Managers, shall appoint a sufficient number of members of the Association, as near the vicinity as may be, to pursue the thief, and shall make out written or printed tickets with the names of the persons appointed; one to each person in the following words: “To ….. having filed a declaration with me that (a mule, horse, mare or gelding) was stolen from him, you are hereby ordered to pursue the thief according to the directions and descriptions of……have also been appointed to assist you in pursuit. (Signed)…….Manager, or by the President.

But if any member be out of the bounds and have mule, horse, mare, or gelding stolen from him, he shall be allowed to hire four men to pursue the thief, provided he file the above declaration within 24 hours after his return home.

Such pursuits, whether inside or outside of the bounds, shall not exceed fifteen miles in every direction from the place whence the animal was stolen, unless reliable information is had that the pursuers are on the track of the thief. All necessary expenses incurred in such pursuits shall be paid out of the funds of the Association, but no greater sum than 5 cents a mile circular shall be paid for any such pursuit.

Whenever a mule, horse, mare or gelding shall be stolen and not recovered, the Board of Managers shall elect two members residing in the vicinity of the theft, and the member from whom the animal was stolen shall appoint one member from the same locality, who shall value and appraise the same, according to the best of their knowledge and understanding, and being first satisfied that the theft was actually committed, for which purpose the reputed owner must procure a copy of his declaration filed, and shall take an oath before some Justice of the Peace that the facts therein set forth are true, and thus being certified by said Justice on the back of said copy. This must then be given to the appraisers, together with such evidence of the value of the horse as may be required. The appraisers shall then make a report of their proceedings to the Board of Managers, who, after examination and approval of the report, shall direct the President and Secretary to execute an order for three fourths of said valuation, in favor of the owner in full for his said loss. The order shall be paid within three months after it is issued. But in no case shall a sum exceeding $200 be paid for any horse.

If any mule, horse, mare or gelding should be recovered after being stolen, valued and paid as aforesaid, the owner will be notified by the Secretary to refund the money received from the Society and failure to do so may result in the Society bringing suit to recover the amount.

If any member shall refuse to serve when required to pursue a thief, on due proof thereof at the next annual meeting of the Society, he shall be expelled unless he renders a satisfactory excuse for his delinquency. Any member who is disabled by sickness, infirmity or old age, from personally pursuing the thief, when lawfully required, may appoint a substitute, but if unable to procure a substitute he shall be excused..

Upon information having been received of the theft of a mule, horse, mare, or gelding belonging to a member, the President shall forthwith offer, in his discretion, a suitable reward for the detection and conviction of the thief, recovery of the horse or both.

The January 4, 1880 Item carried the Public Notice for the group. “Public notice is hereby given that application will be made to Henry M. Hoyt, Governor of the State of Pennsylvania, on Tuesday, January 27, 1880, at 2 P. M., for a charter of incorporation of THE MUTUAL HORSE THIEF DETECTING SOCIETY, OF GLEN ROCK, PA., the purpose and objective of which is to secure to its members indemnity against loss, from the theft of any horse, mule, mare or gelding, to provide a system for the detection and recovery of such animal, as well as the capture and punishment of the thief; according to the Acts of Assembly in such cases made and provided.”

The Item for December 17, 1880, carried notice that “the annual meeting of The Mutual Horse Thief Detecting Society, of Glen Rock, Pa.., was held in Item Hall, at which time the officers reported and the following directors for the ensuing year were elected: E. A. Wareheim, J. H. Lamott, W. H. Seitz, George F. Seitz, John B. Roser, Samuel Rohrbaugh, Jacob Hamm, Jacob S. Nace, Isaac Hoovis, Samuel Bahn, A. S. Warner and Levi Attig. At a meeting of the Board of Managers held December 11, the following were elected as officers to serve during the ensuing year: President, E. A. Wareheim; Vice-President, J. H. Lamott; Secty., W. H. Seitz and Treasurer, George F. Seitz.”

Members were also reminded that they must pay their twenty-five cent annual fee before the 1st of February, 1881, or they will forfeit their membership. At the annual meeting held December 2, 1882, it was reported that the society is growing as fifty new members were added during the year.

The organization remained in existence for at least another 40 years as the November 16, 1922 Item announced the annual meeting of the Mutual Horse Thief Detecting Society, of Glen Rock, Pa., will be held December 2 at 9:30 a.m. in the Fountain House. The recap of the meeting in the Item stated that membership was at 500 members and the new officers will serve for 3 years.

Some might tend to think that current vandalism and theft and such reflect our deteriorating communities. One hundred years ago, a citizens group was in operation to track down horse thieves. The good old days were not always good … .
Also of interest