What’s on the horizon from this view atop a York, Pa., ladder truck? 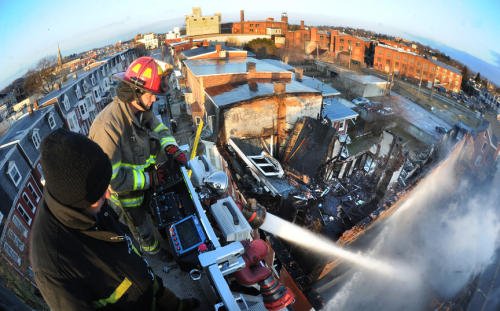 This elevated scene shows York County, Pa., firefighters working to douse a three-alarm fire. From this vantage point, several buildings appear in the horizon. So here’s the question: What are we seeing in the background? Answer is below. Also of interest: York City’s worst, bad fire.

Westboro’s Fred Phelps, who created enemies wherever he and his flock traveled, passed away this week.

This added to the list of high-profile court cases coming from York County.

Remember this photo with a mystery post recently? What building did the Teachers Institute meet in? Look at comments with this post, which show how folks worked it out: It was the old York High School, better known as the Hannah Penn Junior High School. It is long gone and its footprint is covered by the St. Patrick’s school parking lot. One investigator noted that J. Boll Co., Undertakers, on a sign in the upper right, operated on South George Street. He produced this website for W.J. Boll Undertakers. We appreciate this assist from our readers in solving this mystery.

Papergreat is great: Reminding readers here about the Papergreat blog, in Chris Otto tells all about ephemera. For example, his Pennsylvania category recently listed some recipes from a 1929 Pa. Grange Cookbook. Neat stuff over there.

Magnanimous gesture: These two rock and rollers were honored several years ago at York High. This YDR FB post didn’t attract a lot of engagement, but its discovery via Google allowing people to enjoy memories of these former rock stars:

*This scene comes from a ladder truck positions at about West Philadelphia and North Belvidere Avenue in York. The background shows the vicinity of the factory district of the Avenues and beyond. For more photos from this damaging fire, check out YDR.com’s photo gallery.