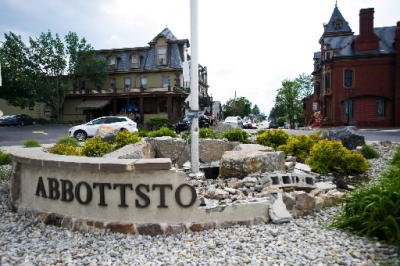 Abbottstown is in Adams County, just over the line from York County. The borough has been working for years on beautifying its circle. It’s been a tough battle to enhance its small circle, small compared to its neighbor New Oxford’s beautiful, grassy intersection. Well, over the weekend, a driver, distracted by spilled coffee, bashed in an identifying sign. So work on Abbottstown square will go one. Which leads us to a quick quiz: What two York County towns have squares with monuments or parks on islands in their center? Traffic flows around these islands. (See answer below.) Also of interest: Why is Hanover Country Club in Abbottstown?

Marg Gotwald, marg47@gmail.com, emailed recently about York’s lost landmarks, specifically the York Valley Inn:
“In 1958, our family moved from Elmwood to Yorkshire, further East as the York sprawl devoured up land. There was an Inn where Panera Bread and Walmart now stand, called, as I recollect, ‘Ye Olde York Inn’ with the date 1741 near the front door, the same year that the town of York was incorporated.

“I was only 10, but, already a history buff, was fascinated by this building, still a working Inn, imagined all the wayfarers and locals who once frequented this place, enjoying a rest upstairs, or a few brews and vittles and making conversation, telling stories of their adventures of the 18th century, laughing at human circumstance, meeting new people, enjoying life and also mourning the tragedies that were frequent during that time period.

“I envisioned myself as a likable wench, maybe serving them their grog and grub. I couldn’t wait until I was old enough to walk through those doors, belly up to the bar, hoist a drink and toast the “ghosts” of those who stopped along the Lincoln Highway on their way to fulfill their future destiny or the locals who relished the camaraderie of friends. I thought by just being there, I could soak up some feeling or knowledge left there by former visitors and guests.

“Then one day, the unthinkable occurred. They were tearing down MY INN! I remember yelling. “NO!” wondering how could anyone destroy this wonderful piece of history for a parking lot. Later on, I learned that the building had been taken down and rebuilt on the grounds of the Susquehanna Memorial Gardens, a cemetery! I’ve been there to see the building. It’s not the same…”

It’s not a working tavern. It’s not inviting. It’s cold, she wrote.

“The ‘ghosts’ of the olde Inn haven’t traveled with it. There is no fun to be had at that cemetery. I mourn their loss, and regret that I will never meet them, except in my imagination… ,” she wrote.

Blog post of the day: Only in York County’s Joan Concilio addresses queries about:

1. Berry’s (and not Bury’s) Restaurant
2. Following up on Lil’s hangout
3. Exact location of Hollander’s store

Remember the drive-in in Springettbury? A new fire station is planned for Springettsbury Township. It’s located on a piece of land that many folks will remember: The old Stony Brook Drive-in.

Upcoming in Stewartstown: The railroad museum in that southeastern York County borough has scheduled an open house in June.

Answer to quiz above: Goldsboro and Jefferson are the two York County boroughs with parks or monuments in the middle of their squares.