What stood for 142 years came down in hours: Linked in with neat York County history stuff, April 26, 2012 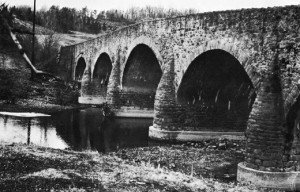 This is a York County scene, although this five-arch Roman-style bridge does not seem to typify the county. But it stood at Straight Hill on the York-Carlisle Road between Dover and Rossville. A bulldozer took it down in 1954. What stood for 142 years came down in hours. ‘Straight Hill bridge,’ The Gazette and Daily said in a caption for this 1968 calendar photograph, ‘carried Gen. J.E.B. Stuart on his York county foray which is supposed to have lost the Battle of Gettysburg.’ That refers to the fact that Stuart, Robert E. Lee’s eyes and ears, became separated from the Confederate Army’s commanding general in the days before the Battle of Gettysburg. Stuart spent more than a day in York County, trying to locate Lee. (Click on photo to enlarge.) Back to bridge: Wouldn’t York County be a richer place if landmarks such as this bridge did not come down? Let’s remember that lesson. Also of interest: In 1937, York County had 25 covered bridges. Now, it has one, kind of.

James Carville used a famous line early on in his speech to the Manufacturer’s Association of South Central Pennsylvania last night:

Wednesday night, James Carville was in the deep South.

At least that’s what the “Ragin’ Cajun,” a liberal political pundit, calls this part Pennsylvania, a state comprised of “Pittsburgh, Philadelphia and Alabama in between.”

“I’m kind of glad to be here in Alabama again,” he told an audience gathered at Penn State York’s Pullo Center for the annual event of the Manufacturers’ Association of South Central Pennsylvania, a historically conservative group.

Carville was being Carville, of course. But the question is whether York County is Alabama.

Presidential voting patterns suggest no, as I point out in my post: Is York County part of Alabama?

More Carville: On a more serious side, Carville made a good point, as captured in my tweet: #politics #manufacturing Carville: in depths of Civil War, land grant college initiative took root. Penn State 1 of them. Good in bad times.

Carville and others talked a lot about 1862, that dark year of the Civil War, 150 years ago. It wasn’t a picnic in York County either. When the Confederate marched toward the Pennsylvania border in the campaign that ended in Antietam, local residents nearly panicked. They packed up and many headed east.

That was a false alarm. The next year, the Confederates marched across York County soil to the Susquehanna River.

York’s central market: That’s Central Market, and its comeback is continuing. In fact, there’s a news conference Monday to put up even more new stuff. Twenty thousand people a week used to walk through the market’s doors. Do you think it will come back? How often do you go?

Miller’s Plant Farm: The farm that feeds Miller’s  market has been in the same family for five generations. Here’s a piece of a York Daily Record/Sunday News story – Miller farm in family for 100 years – on the farm, down the hill from Leader Heights Elementary School: “Now, the family farm, Miller Plant Farm, has greenhouses with retractable walls and roll-up shades on the ceiling, all controlled by a computer. ” Interesting stuff.

Sign of the times: Seven Valleys will receive one of the nice roadside signs touting its ice cream making prowess in the 1800s. Check out: Sign notes Seven Valleys ice-cream distribution.

Forum of the day, I: This discussion is a little different, over at the Exchange: What are your memories of over-the-counter medication and remedies?

Forum of the day, II: Exchangers are also discussing: Would bill allow hunting on Gettysburg battlefield?