Gettysburg 150: What lessons can York learn from centennial? 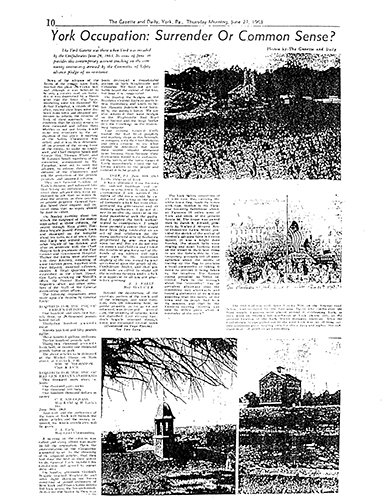 This was York City’s celebration of the 100th anniversary of the Battle of Gettysburg and the Rebel occupation of York in the days preceding the battle. The Gazette and Daily page asked the question but never gave an answer in reprinting the York Gazette’s account of the two-day Confederate occupation of York in late June 1863. Fifty years later, the York’s mayor and other city officials are silent about the anniversary for some reason, but others in York City have stepped forward to highlight this major anniversary. Hanover and Wrightsville, as in the past, will observe the the 150th in a big way. Also of interest: Pro/Con: Should York’s leaders have surrendered to the rebels?.

In Wrightsville and Hanover in 1963, Gettysburg 100 featured parades, speeches and other well-attended Civil War observances.
Midway between those two boroughs, in York, a single-page reprint in The Gazette and Daily served as the only evidence that the City of York played a role in the Civil War. That page reproduced its predecessor’s coverage of the Confederate invasion of York County in the days before the Battle of Gettysburg.
About 11,000 Confederate troops moved through the county, about one-sixth of Robert E. Lee’s Army of Northern Virginia.
They were rebuffed from crossing the Susquehanna River when Union troops first fought them feverishly and then stopped them cold by burning the mile-long bridge connecting York and Lancaster counties.
Shorter thereafter, blue and gray casualties in Hanover mounted to more than 300 after a cavalry clash on the town’s streets.
But in York as the Confederates approached, the town’s fathers rode to Farmers, just west of present-day York Airport, and surrendered the town.
The Confederates marched into York the next day and extorted supplies and money from townspeople.
That surrender was controversial before, during and after the two-day Rebel occupation of York. That moment spawned a theme, now 150 years old, that York had sold out to the Confederates.
+++
For decades, this instance of ambivalence emerging from a crisis point clouded the public view of Civil War achievements in the York area.
York supported a major camp for new Union recruits early in the war and provided a bunch of early responders to guard strategic rail lines. The town fully embraced a large military hospital at Penn Park.
York-area residents were among the hundreds of York countians who lost their lives in the conflict — so many, in fact, that an orphanage sprang up in York: the Children’s Home of York.
But in the centennial year of 1963, none of this bravery mattered to the town’s fathers and organizations.
The city was accustomed to boasting of its American Revolution successes. The results of the Continental Congress’ visit in 1777-78 was later crafted into the claim — overreaching as it was — that York was the first capital of the United States.
Only 20 years before Civil War 100, the York Plan – pooling manpower and machinery for defense purposes – had made international news in World War II.
+++
In the 1960s, York was having its worst decade since, well, the 1860s.
John L. Snyder was York’s mayor in the 1960s, as he was in the 1940s, and was not a bit fit to govern in those complex times.
Thing were heating up on the civil rights front across the nation.
Civil rights leader Medgar Evers had just been shot in Mississippi, and Martin Luther King Jr. was preparing for his March on Washington.
Snyder’s ineptness would become more evident later that decade. He presided over a city torn by riots brought on, in part, by his inability to handle his police department.
So as the rest of the county — and country — prepared for the centennial of Gettysburg, York sat it out while Hanover and Wrightsville danced.
Leadership in city government and its organizations just could not pull up the considerable achievements in the Civil War and place those above the surrender.
The city’s empty dance card in late June and early July 1963 did not go unnoticed.
“Some people are still grumbling because the Greater York area has failed to arrange a Civil War celebration,” the Sunday Patriot-News’ Harry McLaughlin wrote. “Of course, Hanover, Wrightsville, Columbia, Gettysburg, Carlisle and Camp Hill will provide plenty of entertainment and ceremonies.”
The Harrisburg newspaper interviewed York resident Jacque Schmitt, who indicated it wasn’t too late to do something.
“However, I think, for a change, it would be nice for York to take the lead in this area instead of always following the smaller communities,” Schmitt stated. “We need action. Communities around us — with less facilities — do more than us.”
+++
Fifty years later, it’s a different day.
Well, mostly.
York’s Mayor Kim Bracey and other city officials are again inexplicably silent, but the York County Heritage Trust and other York-area organizations have stepped in.
The York County Heritage Trust, for example, sponsored a major speaker, Jeff Shaara; published a well-researched book, Ron Hershner’s “Letters from Home”; and produced the largest Civil War exhibit in York County history, “The Fiery Trial.”
Steam into History, an excursion train with backing from York businessmen, is helping focus public attention on that fourth area of Confederate concentration and special point for Lincoln lovers, Hanover Junction.
Martin Library has released the late Jeffrey Bortner’s book: “When the Rebels Occupied York, Pennsylvania.”
Some 20 books have been published in the past 15 years touching on York’s role in the Civil War, after a gap of about 100 years when little of substance came off the press.
The York Daily Record/Sunday News, successor to The Gazette and Daily, is covering all these Gettysburg 150 York-area activities, has introduced a Civil War iPad app and e-book and is opening a satellite office in Gettysburg to aid in coverage of this sprawling 150th event.
What has happened?
+++
Let’s give the 125th anniversary of the Battle of Gettysburg in 1988 due credit.
That anniversary saw Mayor William Althaus – unlike counterparts Snyder and Bracey – hold a mock surrender of the city to a re-enactor playing Confederate Gen. Jubal A. Early. Althaus took the measure of the surrender demand and replied, in paraphrase here, “Heck, no.”
That anniversary, Mark Snell had just published a master’s thesis probing York County in the Civil War, which took a dry-eyed look at the county in the 1860s. The York Daily Record published his findings.

Thomas L. Schaefer’s multipart narrative of the Confederate invasion appeared in the York Sunday News.
And the York County Historical Society’s new chief exec, Pat Foltz, stiffened the spine of local researchers who might have otherwise taken on other projects. Within a decade of the 125th, Foltz played a key role in overseeing a Civil War exhibit at the York County Visitors Center in York’s downtown, an honest account of York’s story that included an explanation of the surrender.
The society and its successor, the Heritage Trust, have since factored the Civil War into its portfolio of books, exhibits and programs. The York Civil War Roundtable, founded in 1997, meets at the Heritage Trust.
+++
On the eve of Gettysburg 150, what lessons can we learn from all this?
Clearly, these anniversary events can focus attention on key shaping moments from our past. Gettysburg 125 did that in a helpful way that the silent centennial of 1963 in the York area didn’t.
In his recent book about U.S. Grant, “The Man Who Saved the Union,” H.W. Brands relates a conversation between ex-President Grant and a European leader.
The war was primarily to preserve the union, the leader offered.
Well, Grant replied, it might have started that way, but it was really about slavery and the stain that institution represented on a democracy.
So the York-area community that was not ready to address the Civil War in 1963 was unprepared for a discourse on slavery and its undergirding racism.
About a decade after the 125th, York’s District Attorney Stan Rebert sought to close a lapse in justice in bringing assailants to court in the shooting deaths of a black woman and white police officer in the 1969 race riots.
A city that was beginning to talk about the Civil War was now more ready to address its relationship with racism.
Which leads one to ponder the community advancements that will come from Gettysburg 150 and York’s role in its related military campaigns, irrespective of city’s government’s absence from the scene.
It’s hard to forecast with specifics, but one can observe that only good can come from focusing considerable attention on this now-unlocked hinge point in our past.
More speech, not silence, will only help the community move ahead.

For a website packed full of Gettysburg 150 photos and stories, apps and ebooks, check out: ydr.com/gettysburg150.