What is this mystery find in the Hanover Evening Sun’s closet? Linked in to history, 12/12/12 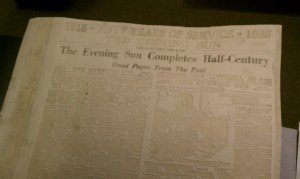 The tweet from the Hanover Evening Sun’s Wanda Murren went like this: ‘@JamesMcClure Any thoughts on this mystery find in @theeveningsun closet? evesunblog.com/insidethesun/.’ It pointed to this image of a newspaper page posted on the Sun’s Inside the Sun blog. The 3-D page’s identity did not stump York Newspaper Co. printing guru Tom Norton: ‘This page was done for pure show and tell. The plate was during the letterpress days of printing where the image was raised on a plate, ink was put on the raised image of the plate and transferred directly to the newsprint. The reason it was for pure show and tell is that the image used on the press would be ‘wrong reading’. When ink is applied to the wrong reading and transferred to the newsprint, the reading would then be right reading on the newsprint. I hope this makes sense as printing, back in the day, had its own, odd way when it converted from hot metal through to the computer generated newspaper of today.’ Tom is saying that the plate is a positive image. If it had been a true press plate, it would have been a negative image, not good for showing off to newsroom tours, which is probably why the plate was produced this way. (Click on the image to enlarge.) Also of interest: Hanover, York County’s oldest borough.

It will be a good day in Glen Rock.

But we shouldn’t forget an annual event that never seems to waiver: The annual stroll through the streets by the Glen Rock Carol Singers.

In fact, as I write this, a counter on the Glen Rock Caroler’s website says the Christmas Eve performance will take place in about 12 days and 20 hours.

Blog post of the day: York City Limits tells about a York store that combines art and history: Art and Framing Warehouse.

Forum of the day: Exchangers are commenting about a recent appearance in York by the mother of the Nickel Mines shooter. Background: Amish kindness after Nickel Mines influenced York County principal to offer forgiveness to machete-wielding assailant. 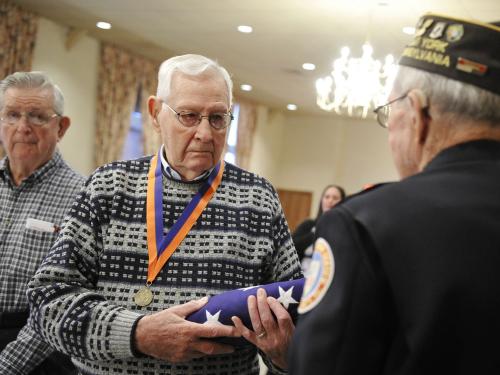 This is one of York County’s last remaining Pearl Harbor vets, 91-year-old Hanoverian Malcolm Harner, who was feted at the recent York County Veteran Affairs’ Pearl Harbor breakfast. Ydr.com reported on the event in the story, York County remembers Pearl Harbor: ‘I was on guard duty when the first planes flew over. I could see the pilot and I waved at him as he flew over. I remember he even waved back. I couldn’t tell that they were enemy planes and then a senior officer grabbed me and said get to cover, we’re being attacked. One of the planes was shot down and landed about a 100 feet from me. I got a good look at it. I can still see it.’ Harner was a sergeant in the 19th Infantry of the U.S. Army.