What is more York County than Yorkco, now Johnson Controls? 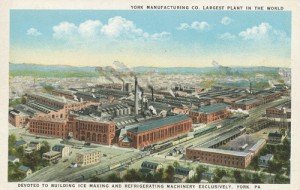 York Manufacturing Co. is the focus of this postcard featured on Joan Concilio’s Only in York County blog in 2011. Joan wrote that the postcard described York Manufacturing, forerunner of Johnson Controls York, as the “Largest Plant in the World Devoted to Building Ice Making and Refrigerating Machinery Exclusively, York, Pa.” This plant is now an industrial park,the home of Buchart-Horn/BASCO Associates engineering and architects. A second facility, the Grantley Plant is the current home of Johnson Controls. The company is seeking a move the operation to southern York County, if plans can be worked out. (See additional photograph below.) Also of interest: Check out these stories and photographs about Yorkco from York Manufacturing to Johnson Controls.

The news that Johnson Controls is finding its York-area site inadequate for future growth brings a wave of disappointment. The company has been part of the community since 1874.

But then you realize it can still be part of the community, only 15 miles or so farther south in Hopewell Township.

I write it can be subject to governmental approval of its plan – something that must occur seamlessly.

All this gives an opportunity to reflect on the importance of the company that has lined up this way since 1874, as I explained in the post:‘Little Johnny’ called from York for Allies in World War II:

As for the company’s importance, here was my explanation in the same post.

“After ‘In the thick of the fight’ (my World War II book) came out, some critics wondered why I had so much information on York Corporation and their workers when so many others also sacrificed so much. I ask them: What is more York than Yorkco? The company is named for York. In fact, its two plants – West York and Grantley – were known as “The Yorks.” It was founded by S. Morgan Smith, among others, in 1874, and we know the mark he made on York – Precision Components, Voith Hydro and American Hydro. P.H. Glatfelter came in to save York Manufacturing in the 1880s, so that covered the paper mill, too. What is more York County than the Glatfelter legacy? Glatfelter brought in the venerable Shipley family. Thomas took the company to international fame. His brother, W.S., guided the company through World War II and was the primary organizer and promoter of the York Plan. Yorkco was perhaps the county’s largest manufacturer in the World War II era with 4,500-some employees with another 1,000 in the field. Yes, the use of Yorkco to tell the local story of World War II is easy to defend.” 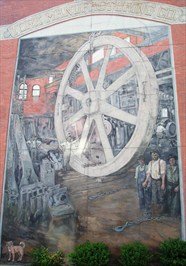 York Manufacturing Co.’s mural was the first of the 18 large scale panels that make up the Murals of York. The Roosevelt Avenue mural wasn’t originally a part of the murals program, but was later added.