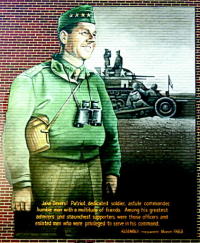 Gen. Jacob L. Devers earned a reputation as a military commander for achieving what he set out to do. He enjoyed strong family ties to predecessors of Johnson Controls. This image is one-half of a two-panel painting, part of the Murals of York. To see Devers’ counterpart on the homefront, also with Yorkco ties, see photograph below. These leaders come to mind at a moment in which Johnson Controls is considering moving at least part of its operations from the York area Also of interest: Part I: What is more York County than Yorkco …  and All Yorkco posts from the start.

The following is a York Sunday News column writing through (as journalists say) Johnson Controls deep roots to York County:

What is more York County than Yorkco, now Johnson Controls?

Johnson Controls’ headquarters might be in Milwaukee, but its products are as solid as ice in the heads and hearts of York County.

So when cooling giant Johnson Controls said last week that it was relocating at least its Grantley plant test laboratories, York County froze for a second.

But then came the welcome news that the company might move those facilities to Hopewell Township, not far from the Shrewsbury exit of Interstate 83.

Johnson Controls officials, working with government officials, should erase any uncertainty that the southern York County site makes sense. And Johnson Controls should make it clear how much of its York-area operations is moving.

Johnson Controls is York County, arguably more interwoven into our fabric than even the iconic Harley-Davidson.

I made this point in a speech to Johnson Control’s 25-Years Continuous Service Club in 2007 and in a column in the York Sunday News in 2009.

We’ve adapted that material here – the second time for both the speech and the column on these pages – because they explain Johnson Controls’ deep roots.

And before YI came Borg-Warner.

And before Borg-Warner came York Corporation.

But the 25-Years Club has been a constant through much of the changing history of this international maker of refrigeration and cooling equipment.

In the dark days of World War II, 25-Years Club members at York Corporation earned a well-deserved reputation as a critical stabilizing influence.

As young men and women were called to serve in uniform, the 25-year members were there. In 1943, 543 Yorkco employees – 16 percent of the work force – had been continuously employed by the company for 25 years.

You’re the heirs of these veteran employees who did what they could with what they had to help the Allies win the war.

A couple of years ago, I was mulling how to tell the story of York County in World War II.

I had a massive amount of material, and I needed some type of frame or device to tell that story.

I was browsing through boxes of books at the York County Heritage Trust’s Book Blast and came across a full set of Shop News from the 1940s.

I immediately knew how I was going to tell the story. I would use the Shop News – Yorkco’s newsletter to employees at home and in uniform – as a thread to weave the story of life on the home front and war front.

After my book, “In the Thick of the Fight,” came out, some critics wondered why I had so much information on York Corporation and their workers when so many others also sacrificed so much.

I ask them: What is more York than Yorkco?

The company is named for York.

In fact, its two plants – West York and Grantley – were known as “The Yorks.”

It was founded by S. Morgan Smith, among others, in 1874, and we know the mark he made on York – Precision Components, Voith Hydro and American Hydro.

P.H. Glatfelter came in to save York Manufacturing in the 1880s, so that covered the paper mill, too. What is more York County than the Glatfelter legacy?

Glatfelter brought in the venerable Shipley family. Thomas took the company to international fame. His brother, W.S., guided the company through World War II and was the primary organizer and promoter of the York Plan.

Yorkco was perhaps the county’s largest manufacturer in the World War II era with 4,500-some employees with another 1,000 in the field.

Yes, the use of Yorkco to tell the local story of World War II is easy to defend.

What I found was that Yorkco’s connections were everywhere in York.

They had a son, Jacob Loucks Devers, who grew up down West York Avenue from Yorkco’s West York plant and then went to West Point and ended up on the west shore of the Rhine, locking arms with George Patton in the march across Germany.

He became a four-star general, one of the highest-ranking officers of the war.

He was Yorkco, true and blue.

Yorkco’s 1,200 men and women in uniform did march home after V-J Day in 1945. Well, 25 who courageously died in service to their country did not.

Those returning joined millions of other Americans to become known as the Greatest Generation.

And because of their sacrifices on the home front and war front, in what Ken Burns called “The War,” we can enjoy liberty and freedom today.

Jake Devers returned to his hometown after his duties in Europe in June 1945.

With perhaps contributions by the men and women from Yorkco and other factories in mind, he told a crowd filling the grandstand at the fairgrounds:

“With this great effort put out in York, you have given us the equipment and the food and the incentive to go ahead, without which we could not have done what has been done.

Still more on that Devers homecoming in 1945.

A meaningful meet up came at the Yorktowne Hotel

Devers, back from leading hundreds of thousands of soldiers in Europe, was enjoying a World War II hero’s return to his hometown.

York Corporation’s William S. Shipley – W.S. – joined Devers and scores of other dignitaries at the hotel.

When Devers and Shipley met, York County’s greatest soldier greeted the industrialist who did more than anyone else to promote the York Plan – a system in which men, machines and material in almost every plant worked for virtually every other plant to keep fighting men supplied in the field.

It was the war front shaking hands with the homefront.

This exuberant June meeting celebrated the synergy of the vital American industries that supported the soldier in the field, who fought, in part, so that the industries could continue to freely prosper.

Johnson Controls, indeed, has freely prospered since then, making refrigerator and air conditioning equipment large enough to chill the English Channel Tunnel and the Taj Mahal and small enough to cool a home.

If Johnson Controls must move its labs and perhaps more – businesses need to change – the company must freely prosper on its home field – York County, Pa. 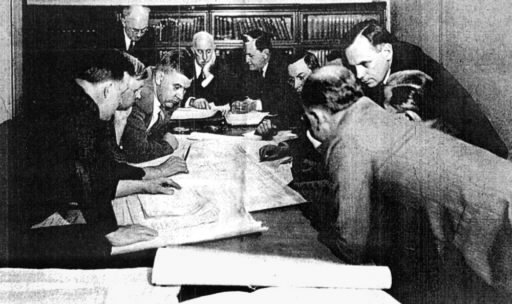 W.S. Shipley led Yorkco – York Corporation – in World War II. The Yorkco chair did not lose his engineering roots. He’s seen here, at the head of the table, poring over plans for a large contract with other leaders of York companies. This photograph comes from Shop News, the company’s employee newsletter.

Improvements studied for I-83 at Shrewsbury, regardless of potential Johnson Controls move

Check out these stories and photos of Johnson Controls from its York Manufacturing Co. roots to today.