What is black and white and red all over? A York, Pa., newspaper quilt 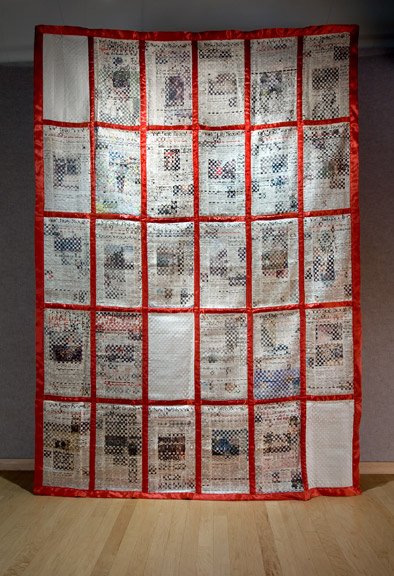 York countian Gale Jamieson created this artwork – made from issues of the York, Pa., Daily Record. It’s an on-point example about how artists preserve history and helped form the fabric of a community. Also of interest: William Wagner, Lewis Miller made York, Pa. ‘one of the most highly depicted communities in the early nineteenth century United States’.

Witness the handiwork of Lewis Miller, William Wagner and others. So when York City’s Angie Anderson flagged this work of York artist Gale Jamieson, we took note.

Gale Jamieson has relocated her studio from southern York County to downtown. ‘Gale is a “seasoned” artist and has quickly become known as a mover and shaker as our arts community continues to emerge and take us in new directions,’ Angie wrote.

She works with the Rudy Arts Collaborative. Her work has been exhibited at the Smithsonian and throughout the Mid-Atlantic region.

According to Angie: This piece is a mixed media installation piece made from issues of the York Daily Record. The artist wove it an 84-inch by 120-inch quilt held together with red silk ribbon. It hangs in her 38 North Beaver Street gallery.

The artist is looking to place this piece permanently and prominently in York. It would require some sort of permanent case to protect it – a place where it could be ‘viewed, preserved and appreciated.’ So if readers have ideas, contact Gale.

By the way, with the York Daily Record/Sunday News taking on a new look this week, the newspaper used by Gale will become an artifact that could be lost to history. See what I mean about art and artists as preserving history?