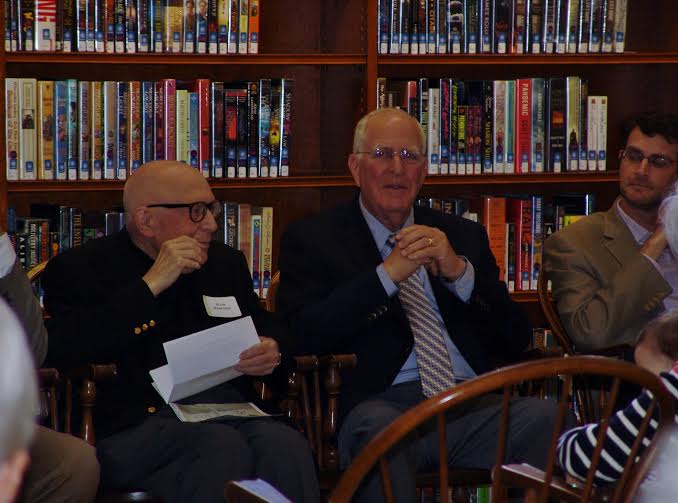 York Sunday News columnist and community connector Gordon A. Freireich was honored at Martin Library last week. A fund has been set up in his name to purchase new books for Martin Library. Freireich, center, is pictured with Allan Dameshek, left, and his son, David. Both provided tributes as part of the Martin Library Honors program. (Photo, courtesy Martin Library). Also of interest: A sample of Gordon Freireich’s work – York, Pa., landmark: ‘The house with a garden wall.’

If asked to describe native York countian Gordon Freireich in a couple of words, many people would respond: He writes that York Sunday News column with such a sense of place and history.

I would, too, but then I’d quickly add he’s a “community connector.” Those complimentary words are adapted from Malcolm Gladwell’s ‘Tipping Point.’ I apply them here to Gordon, who knows lots of people in many and varied social circles around past and present York County. He works to connect these friends and acquaintances with one another.

I’ve attached that quality to two other people in the past – Voni B. Grimes and Luther B. Sowers. (Send your ideas of other such connectors to jem@ydr.com.)

Here’s a Freireich/connector example from just the other day:

A York Daily Record/Sunday News reporter was asking me about a particular neighborhood in York city. I told him what I knew and then suggested he talk with Gordon about those blocks and people who could talk about life there.

I’m sure Gordon gets such queries numerous times a week as he helpfully moves around the community. And he hits a mass market as a connector with his weekly York Sunday News column ‘York at Heart.’

The folks at Martin Library recognized this quality and other contributions in honoring Gordon last week.

I took particular note of one such remark.

Longtime Freireich friend Allan Dameshek commented that when my York County history book “Never to be Forgotten” is revised and updated, Gordon Freireich should be included in there.

Well, his name will be in there, at that yet-undetermined moment in the future.

That’s one connection that I can make.

A sampling of YorkTownSquare.com posts that referenced Gordon’s columns:

– Time for York to break shackles of Colonialism.

– Columnist has memories of a once-bustling downtown.

– Check out even more Freireich columns.

A list of previous Martin Library honorees can be found at this post detailing 2009’s honoree, Judge Emanuel Cassimatis.