West Shore Theater, less than a mile from the York County line, offers a step back in time

New Cumberland’s West Shore Theatre is a single screen community movie house that was typical of small towns across the southcentral Pennsylvania – and maybe America – 50 years ago. Now there are only a handful in the area. West Shore is in Cumberland County. York County’s only such operating theater is the Glen Theater in Glen Rock. Also of interest: The last picture show: Glen Rock’s Glen Theatre.

Take the old bridge – the type with overhead girders  – from Fairview Township in northern York County to New Cumberland in Cumberland County.

You take a step back in time.

In the central part of that borough – less than a mile from York County – you can enjoy any of a number of eateries and then walk to a move at an old movie house – the West Shore Theatre.

The movies there are recent releases or titles chosen, at least, with some care. “Argo” had a long run there. This weekend, “Zero Dark Thirty” of Academy Award fame is showing.

So, what the West Shore’s story?

Cinema Treasures, a website that keeps track of such things, says:

“The West Shore Theatre is a classic single screen Streamlined Moderne theatre in the heart of downtown New Cumberland. It is the West Shore because it is on the west shore of the Susquehanna River, across from Harrisburg.

“The West Shore opened on January 20, 1940 with the movie “The Secret Life of Dr Kildare” and admission of 25 cents for adults, 15 cents for children. The theatre was designed by Philadelphia architect William H. Lee in an Art Moderne style. Interior wall coverings were in an old rose shade. The auditorium was furnished with walnut paneling on the side and rear walls and the ceiling had a hand painted oil painting. The theatre was built with air conditioning.”

The theater is also an artifact of history from a different angle. It was built in 1940 when the Great Depression was still impacting life. People tended to stay at home and enjoy the offerings of their town – libraries and the like.

So New Cumberland actually benefited from the Great Depression. And  movie lovers in today’s more affluent times can enjoy one of the products of this tough time from America’s past.

The bad – and, yes, the good – of the Great Depression 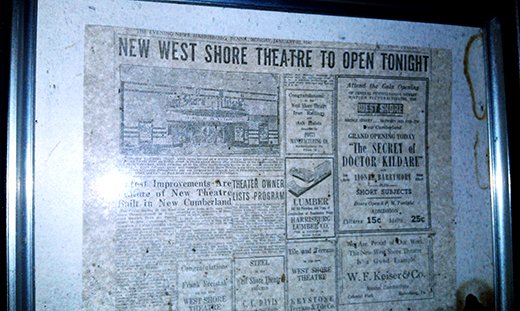 A newspaper image hanging outside the West Shore Theater tells about the movie house’s opening in 1940.