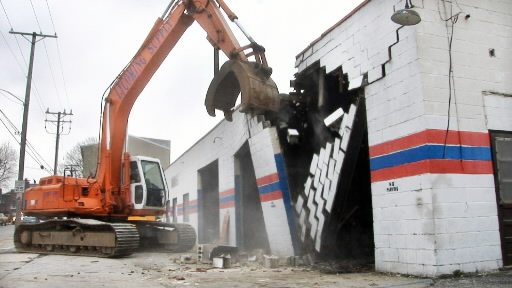 York Mayor John Brenner mans a machine that is knocking down part of Weaver’s Auto Body on North Beaver Street. The building was partially demolished as part of groundbreaking ceremonies for the Northwest Triangle project this week. Background posts: Map explains York’s $50 million redevelopment area and Skinny dipping in the Codorus?
Now that groundbreaking for the $50 million Northwest Triangle Project is out of the way, contractors will spend months cleaning up the soil contaminated in the largely industrial section of town.
In his “Skinny Dipping in the Codorus,” Raymond Sechrist gives a glimpse of one contaminating industry in that region at the turn-of-the-20th century.
It centered around William Gerber’s coal yard on both sides of North Water (Pershing Street) and touched on a long-passed way of life: …

“Coal yards in those days were numerous. There wasn’t any such thing as oil or anything like that back in my early days. It was all coal or wood. They had siding in these coal yards and they built up a trestle-work high enough that a horse and wagon could back in, maybe twice the height of the horse and wagon. A coal car had the doors underneath. They’d open these doors up and let the coal drop down on the ground or into a coal wagon… .
“Then it was delivered by horse and wagon. Most them had two horses. The coal wagon was made in such a way that, when they’d pull up to a cellar window to put the coal into the house or residence, the front end would lift up and the coal would slide down. They had coal chutes that would go from the wagon into the cellar window and into the coal bin. The coal would slide down into the cellar.”

The York Daily Record/Sunday News story (1/16/08) on the groundbreaking of this historic project – touted as the largest redevelopment project in memory (how about the A.B. Farquhar Co. on North George Street in early 1970s?) follows:

With the help of a demolition crane, York Mayor John Brenner tore down part of Weaver’s Auto Body Garage on North Beaver Street as part of the groundbreaking ceremony for the Northwest Triangle.
“We’re going to clean up this site so it’s ready for the 2008 construction season,” Brenner said Tuesday morning.
The Northwest Triangle is the largest economic development in recent memory for the city, which carries a price tag of more than $53 million, Brenner said.
When finished with the project, residents can work, live, shop, and play all within downtown York.
“History tells us that if we are going to have healthy and vibrant cities, there has to be home ownership,” Robert Kinsley, CEO of Kinsley Construction, said.
Kinsley Construction and Baltimore-based Enterprise Homes will redevelop the 9 acres of land that will use the Codorus Creek as a focal point.
Matt Jackson, the city’s economic development director and the redevelopment authority coordinator, said the creek is a key to the triangle.
“Particularly in the South, most towns and cities redevelop around the waterfront,” Jackson said.
The project will also hopefully spur redevelopment in neighborhoods surrounding the triangle, Jackson said.
In 2008, most of the work will be to clean-up possible contaminated topsoil from the area’s industrial past.
For York resident Josh George, the project is long overdue.
“You’ve seen for years development outside of the city,” George said.
George has lived in York County for 25 years and recently moved to the city in 2000.
“It’s a tremendous project for the city. And it’s really interesting to see how it’s taking shape,” George said.