Youngsters, now well-known York countians, enjoy the snow. Can you ID them? 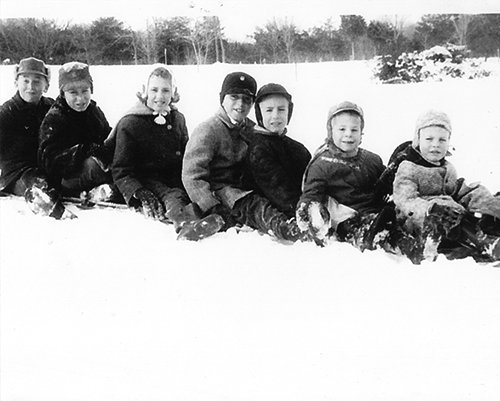 This photo from the early 1960s in Warrington Township near Conewago Creek provides an opportunity to think of cool things. It also is an opportunity to see Mike Kochenour, president and CEO of York, Pa., Traditions Bank, in his youth. He’s seen fourth from left. But who is that now-county official pictured second from left? Look closely and you might figure it out. Answer is below. Also of interest: Where was this York-area bird’s-eye view taken?

Richard Zimmerman worked in the York Newspaper Co.’s production department, and this sharp-eyed typographer many times saved us from embarrassing headlines.

He died some years ago, and it’s always nice to cross paths with his family.

His son, Keith, wrote the other day about something Zim collected:

“In the mid 1960’s he once got permission to take some of the lead as was used for printing. As I recall, he wanted it mainly to melt and use to patch a rust hole in the side of his 57 Chevy, and maybe for some other miscellaneous use. He melted and used a small amount of it, and the rest has sat in a closet in a 5 gallon bucket until now.

“The bucket is over half full, and I’m pretty sure there are 100 lbs or so of lead strips of various thickness, lots of little blocks of individual letters, and even some complete words and groups of words (reads in reverse/is a mirror image of what it would print).

“I recently sorted and separated the plain strips and blocks, individual letters, and those pieces that include complete words or lines of words. I have yet to look thru to see if there are any unique words or phrases.

“It seems to me that this lead is something that’s somewhat special in that it was used to print the Gazette and Daily papers in a time of lots of turmoil and when the newspaper was a main source for local news.

“Do you know if this lead might be of historical value to someone? (Note: I recently visited a Charleston, NC antique shop where they had wooden drawers full of similar lead letters. As I recall, they were selling individual letters for $1.50 to $4.00 each depending on letter size.)”

*Answer from above: Yes, that’s York County Commissioner Doug Hoke, who provided this photo. Hoke’s brother, Jim, and cousins are also pictured, as well as Kochenour’s siblings. The families would go to a cabin together, Doug said. They picture here in on a toboggan.