The Susquehanna River has taken on a lot of looks over the years. It has been deep enough to float log rafts downstream in the spring. It has been shallow enough to walk across in places. In the winter, it has frozen hard enough that vehicles crossed on the ice. Hydropower dams that went up 100 years ago changed much of this. So when there’s a draw down on the river – as is happening this week – to work on one of these dams, you get an inkling about the river’s original stream in the York/Lancaster area. Inspectors are going over Safe Harbor Dam so river watchers are probing Lake Clarke’s bed. Check out: Susquehanna River lowered to allow dam inspection. Also of interest:  For years, York countians have eyed amazing, destructive Susquehanna River ice jams.

Gettysburg 150 is not over yet. We still have the 150th of Lincoln’s delivery of his famous speech in Gettysburg in November.

As part of that planning, Gettysburg is seeking on loan a copy of Lincoln’s Gettysburg Address, one of five written in the president’s own hand.

New look: Ydr.com, our flagship site, has a new look. I wrote through a blog post about this change, and the public is interacting with what I wrote and the new look. Check out: Changes at ydr.com. 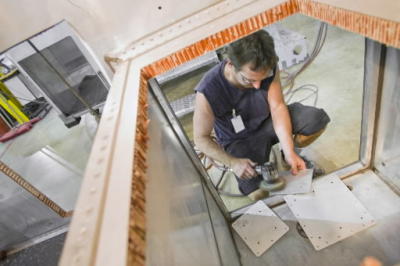 Gichner Shelter Systems, near Dallastown, is another in a long list of York County’s defense contractors. Here, a Gichner employees works on a shelter designed to prevent casualties as in Benghazi.