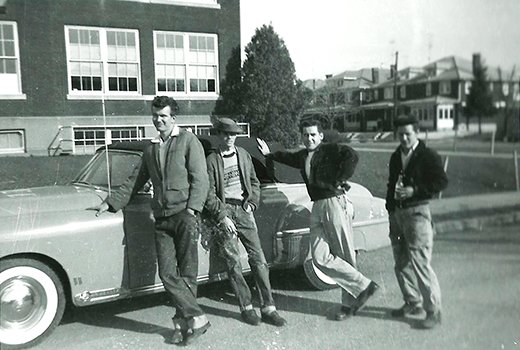 The West York High School baseball team won its second straight state championship this week. Which brings to mind a photograph Gary ‘Pappy’ Heiland sent in recently. He dated it 1953 or 1954, and that’s, from left, Robert Haller, Joseph Newhouse, Gary, and Jack Daniel standing in front of Bob’s 1949 Olds 88 convertible. In the background, that’s the west of of the old West York High School. The old building stands in West York today, not far from the sprawling high school campus. What do you think? Was life simpler then? Another post with a Heiland photo suggests: Simple life in York County not that simple. And here’s another neat photograph courtesy of Gary E. Heiland.

It’s remarkable the number of old high school buildings standing today. Some are close to the new schools – Dallastown and Red Lion are two examples of that.

Others are a fair piece away. The old Glen Rock High School sits on a hill above the borough, several miles from Susquehannock.

Often, the old school is converted into apartments.

In Dallastown, they remain in use for educational purposes – an elementary school in that case.

They built those old buildings well.

Writing from the homefront: Book Buzz blog is presenting this Q & A with Ron Hershner about his new Civil War book: Ron Hershner’s ‘Letters From Home’ focuses on Civil War family.

Best of blogs: Buffy’s World features the week’s best, including a link to coverage of another York County championship team – Northeastern High School boys volleyball. This isn’t the first time that team has scored the top spot either. 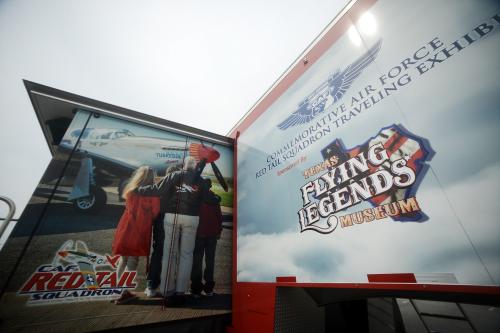 World War II’s famed Tuskegee Airmen are featured in a film in this tractor-trailer as part of the ‘Rise Above’ Traveling Exhibit. Today, it will be parked as part of  Aviation Days at the York Airport. Details:  Rise Above exhibit brings story of Tuskegee Airmen to York. A black airman from York County flew in World War II, one of six from the John Carter family to serve: