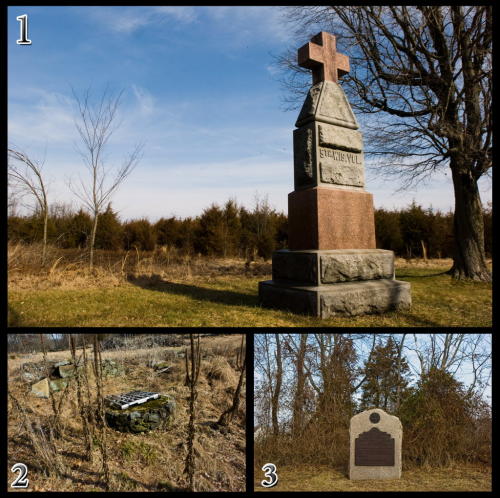 The Civil War Trust is seeking $250,000 in donations to purchase properties of importance to the Battle of Gettysburg, fought 150 years ago this year. The Hanover Evening Sun put together these images with the caption: ‘(1) 36 acres of land adjacent to Howe Avenue, seen behind the 5th Wisconsin Volunteer monument in this picture. (2) Three acres of land near Spangler s Spring where a foundation and an old well are the only remains from the former John Taney Farm. (3) Seventy-three acres next to South Cavalry Field off of Emmitsburg Road.’ Read more at Civil War Trust. Check out these posts that cover the Gettysburg National Military Park.

Camp Security is from a different war – the American Revolution – but its financial need for land acquisition is just as great as those around the Gettysburg Battlefield. (See scores of posts about Camp Security.)

In fact, its need is greater than the Civil War counterparts 30 miles to the west – $400,000 to settle ownership of the land where this Revolutionary War prisoner-of-war camp operated from 1781 to 1783.

Here is some information on those fund-raising efforts:

Live action: Here’s an update on development of the old Bi-Comp building, under development by members of the rock group Live.

Letting off steam: Some New Freedom residents are concerned about plans for an Civil War-era steam train running through their southern York County borough. Interesting, the town was built around the railroad. You would think clinkers from the smokestacks of countless trains would still be in the air.

Forum of the day: 5 buildings in York City are being sized up for artist residences and studios. Think efforts to bring artists and artisans to the city are gaining momentum? Please comment below. Background: Keystone Color Works.