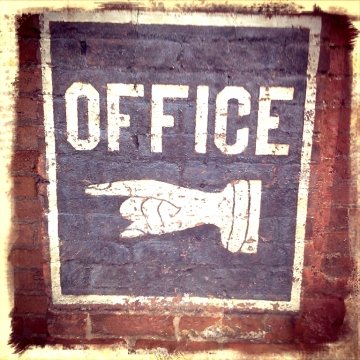 Heather Klinefelter submitted this rather strange ‘Follow this Finger’ signs to ydr.com’s Your Photos gallery. ‘This is one of my favorite ghost signs, I drive or walk past it at least once a day and have for the last 10 years or so. Located on an old warehouse on W Gay Ave in the Northwest Triangle, it never fails to put a smile on my face.’ Heather submitted this ghost sign – you know, those faded signs of old that appear on the sides of buildings – as part of a Flipsidepa.com contest. By the way, does anyone know the story of this sign? (Yorkblogger Stephen Smith offers some explanations.) Blake Stough’s Preserving York blog has several posts on such fading signage around York. Also of interest: Here’s a story about another famous York County finger – the Fissel Finger.

When Harley-Davidson turned off the music on its Springettsbury Township factory floor recently, it made me wonder what sounds were in the workplace before piped in music and boom boxes.

We know that slaves working in the field would sing together. And I understand that factory workers or those working together on various shop floors did the same. The whistle-while-you-work theme may have come from that. Now such singing, without instrumentation, only occurs occasionally in churches

Has anyone ever worked in a shop where it was customary to sing together or run across accounts from York County factories from 100 years ago or such where workers would sing in unison?

Wonder what Harley officials would do if its men and women would sing as they work? 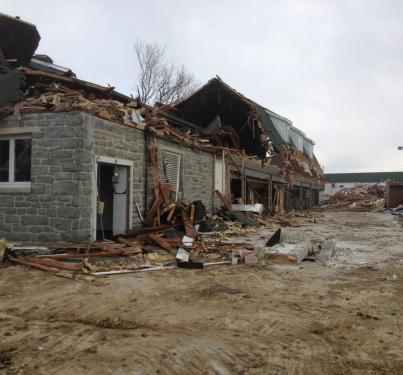 This was the scene at the old Avalong Farm in Springettsbury Township this week. The barn is almost down. Any last words for this landmark, whose demolition was the topic of picketing and other criticism from preservationists this week? Please comment below.

Even more about Avalong: Stephen H. Smith over at York’sPast has done several posts on the Avalong property including this intriguing piece: Alva R. Long acquires the Meadowbrook estate of Harold E. Robertson … .

Remember when? The former Pfaltzgraff pottery store, aka the Avalong barn,  was a popular destination before it moved to Springettsbury. Remember the factory outlet on Pottery Hill west of York, which opened in 1960? Comment below.