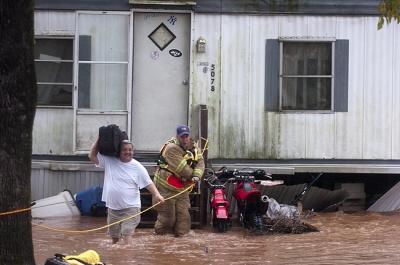 Can you believe it’s been 15 years since that nasty Blizzard of 1996? The York Daily Record/Sunday News is collecting memories of that powerful storm.The anniversary reminds us that such bad weather events have been with us forever, despite what seemed to be an unprecedented year of storms, weird snows and floods (the high waters from one of those is seen above.) For a review of 2011’s bad weather events, visit: Wacky weather in 2011 makes history. Also of interest: Visit the Bad Weather category for numerous stories and photos of past storms and snows.

Marybeth Gallagher is looking for photographs and other information on the old York Whitehull Airport building on Northern Way, across from the old York Mall.

The building, part of the airport that operated there in the 1930s, was known for years as the Valley Canvas building.

“My friend, Chris Mudd,  is the owner of Office Furniture Today,” she wrote. “… I am helping him design the interior and  my design will be a vintage aviation theme,
honoring the building’s heritage.”

I pointed her to the book on local airports written by John F.M Wolfe, available at the York County Heritage Trust bookshop.

And I gave her the following links that provide information and photographs of the airport and the building that is being remodeled: Early York airport operator: ‘My planes will be new and with mufflers to silence them’ and Was the Valley Inn Garage part of Springettsbury Township’s old York Valley Inn? and Just try to resist studying this memory-tugging photograph, Part I and Part II.

If you have other information on the old airport, contact Marybeth at: mary@baileytravel.com

The Mother of Red Lion: The annual Catherine Meyer Award is handed out. Or is it the Catharine Meyer Award? The variation is explained: “Red Lion native wins borough’s annual service award.”

Blog post of the day: Buffy’s World has a link salad ranging from: Opinion page contest to things that will cost less in 2012. She also links to the Top 10 ydr.com videos of 2011.

Forum of the day: Over at Only in York County blog, Joan Concilio is exploring: Rutsch or rutch – Either way, this Yorkism continues to slide around!