The old-time York County community bank: ‘They know me by sight and voice’

Wachovia’s Lisa Walker is dwarfed by safe-deposit boxes at the bank’s York headquarters in this 2006 York Daily Record/Sunday News file photo. Background posts: Will Sovereign Bank of York stadium name fame lose its crown?, Often forgotten: Achievements of people named on building facades and Hillary Clinton’s rally site in York a little odd.
At one time, hometown banks operated in just about every town around York County.
Spring Grove State Bank, for example, was a mainstay in that papertown for decades.
Glen Rock played host to two banks, almost next door – Glen Rock State Bank and People’s Bank of Glen Rock.
Until 2006, East Prospect State Bank was the last of the single-branch hometown banks in York County…. . 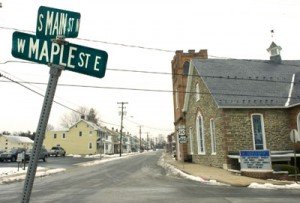 At that time, Harrisburg-based CommunityBanks said it would acquire all of East Prospect State Bank’s outstanding shares for $21.5 million. That subsequently happened.
This caused a customer, Wrightsville Susan Hantz Wolf, to write a letter to the editor reminding everyone of the value of hometown service:

The East Prospect State Bank has always been a community bank. We know them as friends and neighbors outside of banking hours. They live and work here. I can phone and easily find out the missing amount in my check register that I forgot to write down. They know me by sight and voice. I consider all employees of East Prospect State Bank my friends.

Of course, bank mergers are nothing new in York County. The following family tree, as outlined in a York Daily Record/Sunday News article (10/19/08) of just one bank – Wachovia – reminds us of that:

Wachovia and several of its predecessors have occupied the East Market Street site next to the old York County Courthouse for years.