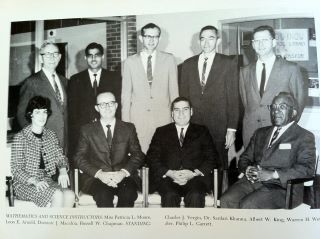 Last weekend, I quizzed YDR Facebook readers with “Who was Aunt Jo of Aunt Jo Lane?” (If you don’t know, check this black history quiz.)

That brought forth an exchange with Marg Burger Gotwald about another well-known member of York’s black community – W. Russell Chapman.

Chapman was a funeral director and Cornell-trained chemist who, among other things, became the first black member of the York City School Board.

Was he the first black faculty member at York College? He at least was on the staff there in the mid-1960s, as Marg Gotwald indicates in the following exchange:

Marg: Mr Chapman was our proctor during Chemistry Lab in the Fall of 1965 at York (then Junior) College. A few friends and I were having beaker wars (similar to squirt gun battles) and Mr Chapman called me out on it, requesting that I come down to the front of class and perform a math calculation on a huge slide rule (bet most younger people have NO idea what that is- but it was used before calculators) that hung above the chalkboard. I dispatched that exercise quickly and accurately and poor Mr Chapman could only congratulate me but I got his message and stopped my shenanigans. He was a kind, sweet man and I am remorseful that I was such an immature student. Mr Chapman knew my mother (we shared the same name) who was Head of Admissions at York Hospital. He would get the morgue key from her when he picked up bodies. Guess in a way she helped with discharges.

Me: Marg, great anecdote. Thanks for sharing. I never knew Mr. Chapman worked at or for the college.

Marg: Mr Chapman wasn’t there in the 1967 yearbook. I think he’d had enough!

Me: I’m going to put your anecdote on my blog, www.yorktownsquare.com. I’m thinking Mr. Chapman might have been the first black instructor – if a proctor is an instructor – at York College. Surely, he was a pioneer. Someone might come forward who would know for sure. Interesting, 2 years later, York Junior College became YCP.

Marg: He was photographed with the science and math faculty so yes he was on the faculty. I had Mr. Macchia for class Mr Chapman for Chem Lab.

Marg: For those of us who were putting ourselves through college YJC was an inexpensive start, especially, with the work/study program. 15 hours a week working in the Publication office cut my tuition bill in half to $400 per semester. Then I transferred to West Chester borrowing and working my way to graduation. Would have been great to finish in York.

Here’s a quiz about pioneers from the black community who made an impact on York County.