Voni and Lorrayne Grimes to be in spotlight of ‘musical extravaganza’ 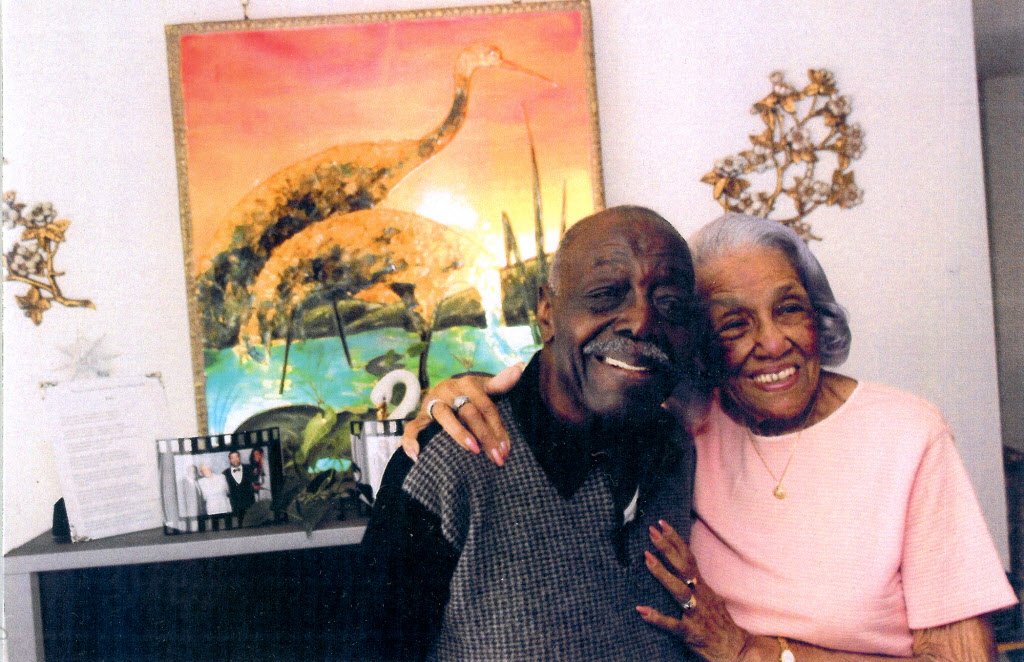 Voni B. Grimes and his wife, Lorrayne, will be honored for their civic involvement at a ‘musical extravaganza,’ as organizers are calling it, on Nov. 30, at Small A.M.E. Church in York. ‘Let me tell you about Lorrayne … ,’ he wrote in his autobiography ‘Bridging Troubled Waters.’ ‘She is as beautiful on the inside as well as the outside.’ Also of interest: Page 22 missing from York, Pa., school book? Turn to Page 11 two times, teacher tells Voni B. Grimes.

Both are known for their work with youth and interest in education, among many community initiatives.

They’ve worked as partners in adding to the community.

“My wife has never been a spectator,” Voni Grimes said, “she has always been a participator.”

The couple has traveled the world.

But Voni Grimes’ educational journey began in his walks down an alley in York – Susquehanna Avenue – where his boyhood home stood.

Here’s a  short contemporary photo essay of the daily journey Voni B. Grimes’ took in the early 1930s. The captions come from a York Sunday News column based on a walk Voni Grimes and I took in 2008: 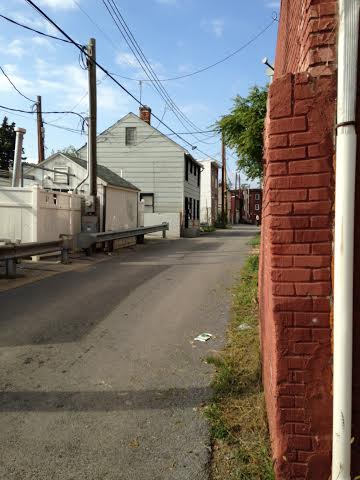 Voni B. Grimes’ home address was 228 Susquehanna Avenue, then a dirt alley. Often, his white friends would join him near his house for the short stroll to College Avenue or meet him at the intersection. That’s where their time together ended for the school day. 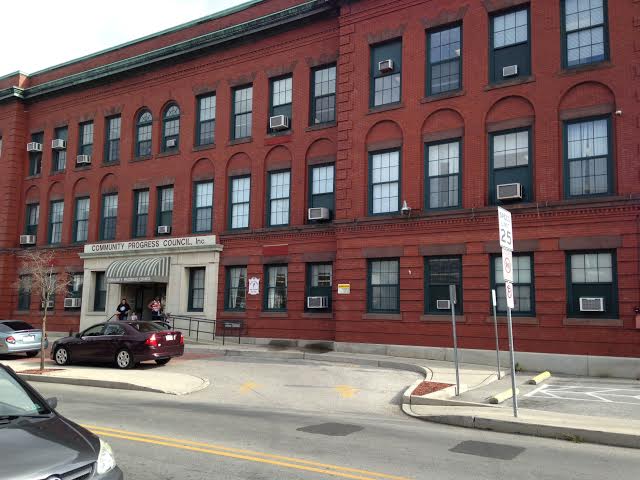 Noell Elementary School stood almost across the street, its doors open only to white students. Those kids, Voni Grimes’ friends, crossed the intersection and entered its welcoming doors. 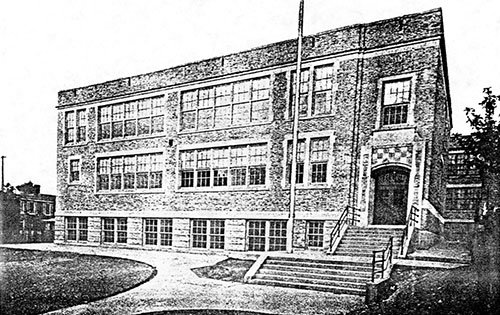 But those doors were closed to young Voni Grimes, who commenced his walk of more than five blocks west on College Avenue to the segregated Smallwood School (later demolished to make way for William Penn Senior High School expansion). In 2008, Grimes would look back at Smallwood as his ‘private school.’
+++ 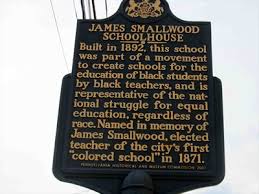 Smallwood School was new when Voni Grimes attended there. It was built in 1931 replacing an older building. Its East King Street counterpart, Aquilla Howard School, went up as well. Both buildings educated black families – their ranks swelled by the Great Migration, the movement of blacks from the rural South to the promise of jobs in the industrial North. Voni B. Grimes’ family was among those traveling north from Bamberg, S.C., where Grimes was born in 1922.
+++ 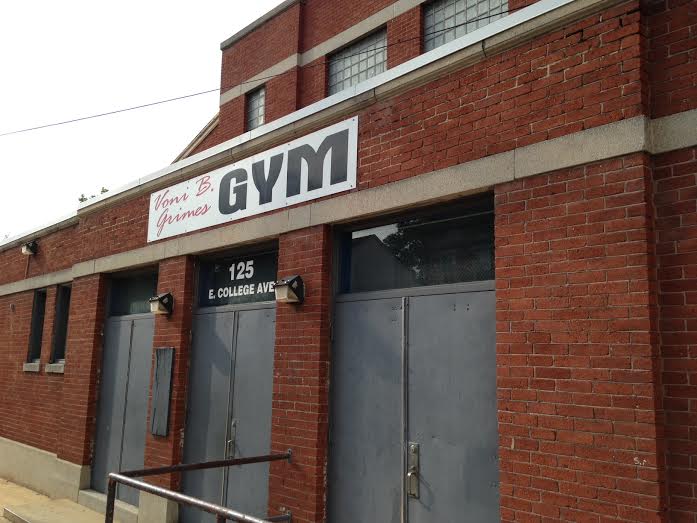 Walking back and forth to Smallwood, young Voni B. Grimes could never have imaged that the old York Collegiate Institute gym would bear his name someday. Indeed, his work in education and in the community makes him one of York County’s best-known figures today. In a pause at York High in the 2008 walk, many young people greeted him. Students milling outside respectfully commented out of Voni’s earshot. ‘There’s that Voni Grimes.’ 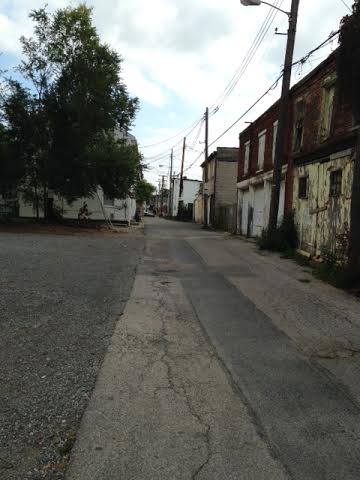 After passing the College Avenue gym on his way home, Grimes would rejoin his friends, both black and white, Susquehanna Avenue. Later, he was part of integrated classes at Hannah Penn Junior High School and William Penn Senior High School, where he graduated. 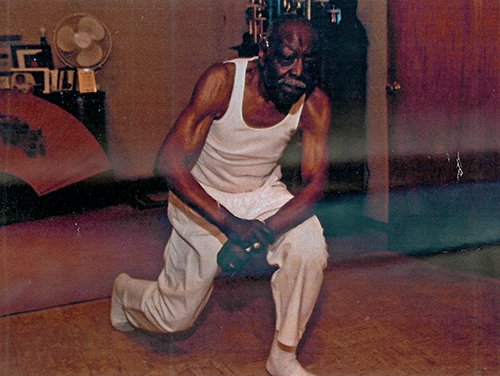 There was service in the Army in World War II and then long years of service at Cole Steel and Penn State York. Voni Grimes, now in his 90s, remains active in the community. He’s seen here after doing 40-plus push-ups. 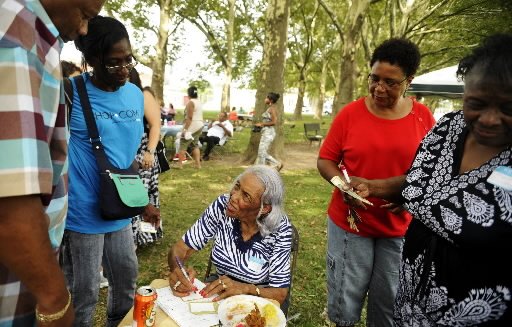 Here’s one example of everyday community service that Lorrayne Grimes, center, has provided for decades. She is recording attendance and writing out name stickers at  the 38th Generette Family Reunion in 2013. Her many community activities include the office of grand worthy matron, Order of Eastern Star; vice president of the Yorktowne Chapter of the American Business Women Association; and service in the youth division of the York Recreation Commission. 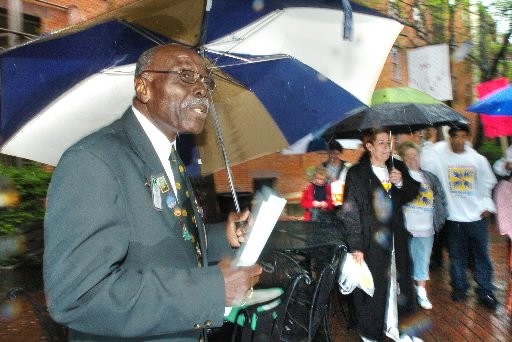 This is vintage Voni B. Grimes, talking, as the rain falls, to residents in a York city neighborhood several years ago. Here, he’s standing in the raindrops. On Nov. 30, he – and Lorrayne – will be standing in the spotlight.

The Grimeses at the Yorktowne: ‘OK, I’ve lived my dream, ‘he told Lorrayne. ‘Now, it’s your turn.’