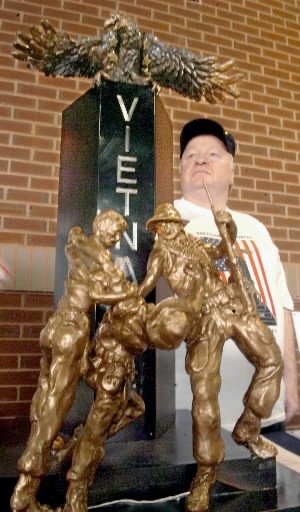 Sculptor Lorann Jacobs’ York County Vietnam Memorial will be constructed at the York Expo Center, with unveiling set for the fall of 2009. This is a model of the bronze figures, promoted by Rickey Cox in 2007 at a York Revs game. Background posts: York County historical war deaths top 1,000, Vietnam vets wall moves York countians and Peeking into Pa.’s attic.

Raising funds for a $300,000 York County Vietnam Memorial needs a boost from somewhere.
About half of the funds are raised for the Lorann Jacobs-designed monument set for the Carlisle Avenue side of the York Expo Center.
Similar Jacobs’ monuments are in place for World War II (on Continental Square) and the Korean War (near rail trail on West Market Street).
So it’s possible to build such deserved markers… .

Some have questioned the placement at the fairgrounds instead of in the city, where a gallery of statues is under construction. That means the statue is a bit out of sight, out of mind compared to its WW II and Korean counterparts.
Let’s hope this isn’t another case of overlooking the contributions of Vietnam War vets.
A York Daily Record/Sunday News story (5/18/08) updates the monument’s status:

Charles Smeltzer grew up in York.
James Furhman was president of his senior class at William Penn and a star on the basketball team.
Both were killed in the same month in Vietnam.
Both of their names will appear on the York County Vietnam Memorial when it is unveiled in fall 2009, along with the names of the 99 other county residents who died in the Vietnam war and one missing in action.
Rickey Cox was friends with both Smeltzer and Furhman. He served in the Marines and made it home. He joined the memorial committee because he wanted to make sure his friends were remembered.
“We don’t want people to forget the York countians who gave the ultimate sacrifice,” Cox said. “Now is the time. World War II has its memorial, and Korea has its memorial.”
Dallastown sculptor Lorann Jacobs has begun work on the bronze figures and granite base, which will be placed near the Carlisle Avenue entrance to the York Expo Center, Cox said.
What is needed is money.
So far, the committee has raised less than half of the $300,000 needed to finish the memorial and pay for future upkeep, member Anthony Stabile said.
On May 25, the day before Memorial Day, the committee will accept donations at Sovereign Bank Stadium when the York Revolution play the Camden Riversharks. They will have a scale model of the memorial, Stabile said.
The committee is also selling engraved bricks for the memorial site.
They want to have the work finished before it’s too late.
“Vietnam veterans are dying off younger than World War II veterans, because of Agent Orange and things like that,” Stabile said. “A lot of them didn’t get a good welcome home. . . . (Building the memorial is) urgent for us. The sooner the better.”
TO HELP
Donations for the York County Vietnam Memorial can be sent to:
Vietnam Memorial
York County Department of Veterans Affairs
100 W. Market St.
York 17405
For more information on the memorial or purchasing an engraved brick at the memorial site, call Rickey Cox at 755-0429.