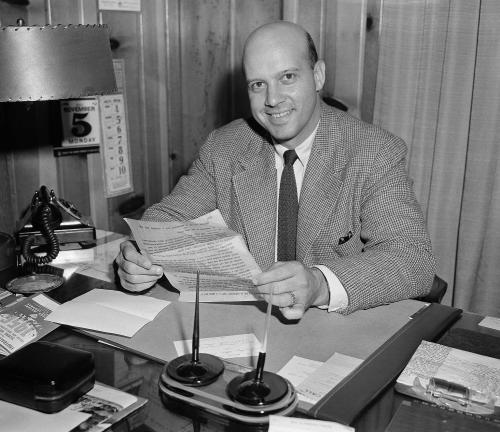 Vic Wertz was born in York, Pa., and spent his first 11 years here. He still has family here. And his name lives on, most famously as the Cleveland Indian who hit the massive long out that Willie Mays pulled down in the 1954 World Series. But his most spectacular achievement was that he returned to a productive Major League Baseball career after contracting polio. His name is back in the news because of efforts to name a field after him at a Berks County youth sports facility. Interesting, he has received no such honors in York County. We should address that. The York Daily Record/Sunday News’ Jim Seip covered this Pennsylvanian’s baseball career and life after baseball in this piece: York native Vic Wertz has legacy that keeps growing. Here, he’s pictured in 1956 in this Associated Press photo. Also of interest: York, Pa.’s, Vic Wertz made baseball history – but there’s a catch.

Readers of this blog know that we track celebrities from York County. Famous people might become historical figures studied by historians in the future. Vic Wertz is one example of that.

So because we’re always looking for celebrities with York County ties, it’s always exciting to run across one that we didn’t know about. Such is the case in award-winning author Maxine Swann.

Zoominfo.com has a brief bio of this Phillips Academy Andover and Columbia College grad, excerpted here:

“Maxine Swann was born in 1969 in York, Pennsylvania. Her critically acclaimed first novel, Serious Girls (Picador, 2003), was selected for the Booksense 76 List, and was published internationally in Dutch and Spanish. Her short fiction has been published in Ploughshares and Open City, and on nerve.com. Her literary prizes include the Ploughshares’ Cohen Award, the O. Henry Award, and the Pushcart Prize… .”

Here’s a piece she wrote for New York Times magazine.

And here are a bunch of other celebrities from York County who made their mark on regional, state or national stage.

Central Market’s 125th: York’s Central Market, in its 125th year, has been photographed hundreds of times. Well, here’s a different look, courtesy of the YDR’s Buffy Andrews’ used of the social media tool Jux. You gotta see this. (See more about the market below.)

Hanover 150: All this talk about Gettysburg’s 150th. Well, Hanover has a big anniversary, too, the 150th of the Battle of Hanover. It has released its anniversary schedule. 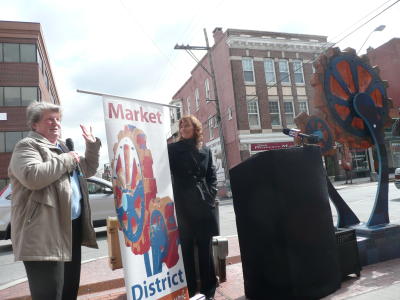 The area around Central Market is being marked or branded by a new Market District logo. Here Elsie Smith, left, and Sonia Huntzinger, exec at Downtown Inc, show the new logo. The gear sculpture, right, inspired the logo and all this points to meshing art and craftsmanship into a ‘Creativity Unleashed’ brand.