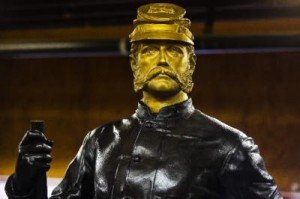 Vandalism of statues and monuments at Gettysburg National Military Park has been a problem for years. One such casualty, this 600-pound 4th New York Artillery statue, lost its head when vandals chained and toppled it in 2006. They carried off its head. ‘It just amazes me that someone would have the guts, the audacity, to do something like that,’ a park spokesman said.  Recently, a new bronze head was fitted for the monument, located near Devil’s Den. The head was cast used a matching statue discovered in a  New Hampshire park. For details about the statue’s rehabilitation, visit:  Gettysburg monument repairs come to a head. Also of interest: Gettysburg statue damage spawns memories of Ellsworth Zouaves.

“I am a descendant of Henry Strickler who in about 1750 established Strickler’s Mill which later became Sprenkle’s Mill. It was on the property at the corner of Stricklers School Road and Strickler Lane and was razed about 1933.

Do you have any information on the exact location of the mill on that property? One theory has it on the corner of the property along the road where Kreutz Creek goes under the road. Another theory has it at the dam further south, beyond the railroad right of way.

Recommended event: The York County Heritage Trust is sponsoring a Coverlet Documentation Day on today,  9 a.m. – 3 p.m., at 250 E. Market Street. “In York County coverlets have adorned many beds and graced blanket chests for decades. Frequently passed from one generation to the next, families who own these treasures miss the opportunity to understand the history and heritage of their bed covering,” a Heritage Trust release states. www.yorkheritage.org.

Recommended event II: The Lancaster Mennonite Historical Soceity will hold a Nov. 11 auction of the collection of former New Holland employee Ivan Glick. It will will include 600 lots of books on agriculture, literature, Mennonite and Quaker history. www.lmhs.org.

Blog post of the day: Don’t miss a ” link salad” from Buffy’s World’s featuring the best of yorkblog.com for the week.

Forum of the day: Exchangers are addressing curtailment of fighting in Afghanistan in Not exactly VJ Day. 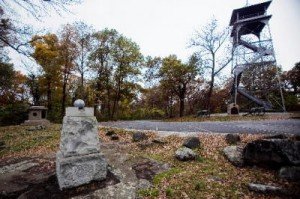 Knap’s Pennsylvania Battery fought on Culp’s Hill in the Battle of Gettysburg. A cannonball atop a monument marking that action was vandalized and replaced just this month. Vandals have removed cannonballs from the monument twice before.