Toyota Arena at York Expo Center is becoming the Utz brand one letter at a time as suggested in this photograph, one of a series captured by York Daily Record/Sunday News photographer Paul Kuehnel. Hanover-based snack food maker Utz secured naming rights to this multi-use building at the old York Fairgrounds. Check out other Kuehnel photos in Yorkblog’s “Look how many ways you can document a sign.” Also of interest: Who performed in the York Fair grandstand in the year (name the year)?

Shane Free is a York County native and filmmaker, and he’s in the early stages of a documentary about the Hex Murder.

He’ll be in York County in July as part of his research.

He’ll no doubt want to connect with Ross McGinnis, the author of the authoritative “Trials of Hex.”

He is looking for local input, which I’ll include, and plans to be in the area this July to do interviews, etc. He and I spoke about re-connecting then. I’m thinking it might be worth a story then with art of him around the house, etc.

Shane has up a FB page on his project which says:

“A documentary exploring the “Hex” murder of Nelson Rehmeyer in November, 1928 and the subsequent murder trials that followed casting the town of York, Pennsylvania into the national spotlight.”

And he accurately described the impact of the murder:

“The court cases that followed gained national attention as the country was shocked to learn the existence of 20th century witchcraft.”

Here come the maps: Stackpole Books soon will publish “Gettysburg: The Story of the Battle with Maps,” M. David Detweiler and David Reisch will edit this look at the landmark Civil War clash. The work includes 70 full-page color maps. Each shows the same portion of the battlefield and traces the hour-by-hour development of events from July 1 to 3, 1863.

Stackpole Books, of course, is  venerable publisher of Civil War titles, its most prominent being Gen. Edward J. Stackpole’s “They met at Gettysburg.”

Gettysburg 150th tree: Gettysburg Seminary and the Gettysburg Seminary Ridge Museum is planting trees as part of  The Living Legacy Project. That’s an initiative of the Journey Through Hallowed Ground Partnership. The idea is to plant or dedicate 620,000 trees, to match the number of soldiers who died in the Civil War. 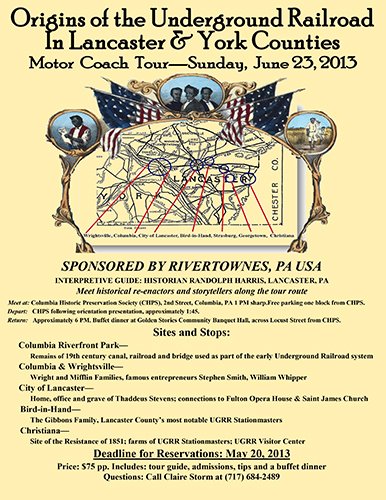 Randy Harris, a student of the Underground Railroad, will lead tour later this month.