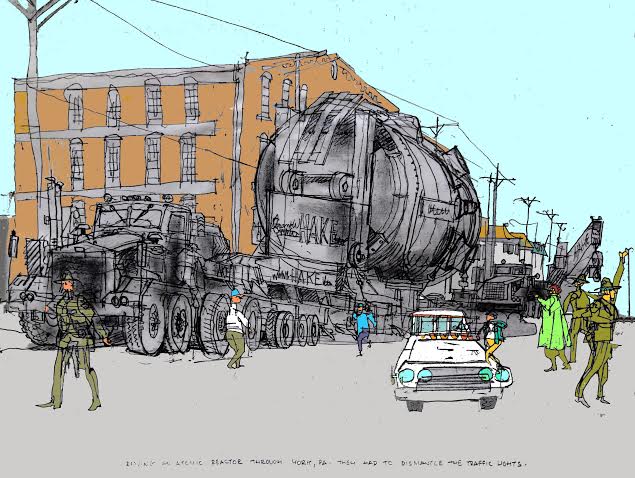 Still on the artist Cliff Satterthwaite beat. He keeps sending in these interesting scenes documenting York County, Pa., in the 1960s and 1970s. This one shows a large piece of equipment passing through York County on its way to Peach Bottom Atomic Power Station in the county’s southeastern corner. The artist noticed that utility poles had to be moved to accommodate this slow-moving monster, circa 1965. Also of interest: Check out these other Cliff Satterthwaite drawings.

Anyway, Cliff Satterthwaite brings home the point of the point about the heft and girth of stuff in York County in capturing the movement of a piece of Peach Bottom nuclear plant above. 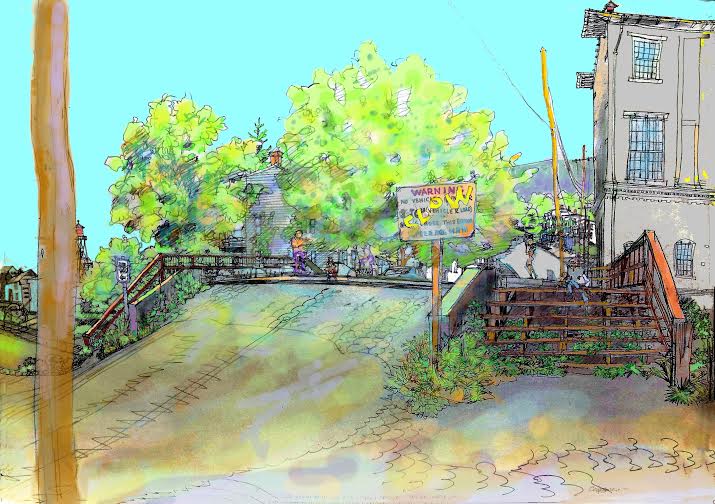 And we’ve shown the North Penn Street “drawbridge” drawing before, but bring it back here because reader Linda Smith tell how it was needed. That is, to accommodate big heavy things moving on the tracks it spanned.

Here are Linda’s recollections after seeing Cliff’s drawing in the York Daily Record:

“Seeing the picture of the Penn Street bridge brought childhood memories to me. I grew up at 206 N. Penn St., three houses from the bridge. The raising of the bridge a few times during the year was a favorite thing for the kids in the neighborhood. The street would be blocked off and they would somehow raise one side of it so that a big turbine would be brought down the railroad to the S. Morgan Smith Co. which was on Linden Ave.

“We would ride our bikes and roller skate in the street all day, which was a big treat. The bridge was a place where we would gather to watch the fair and circus trains go to the fairgrounds. If we would hear a freight train coming we would run to the bridge to hear the man in the caboose toot his whistle. Also, the engines in those days were steam so we really liked being covered with the smoke.”

“Many a driver would not slow down enough to go over the bridge. We would sit on our front porch in the summer and watch them almost be airborne. It’s amazing how an old bridge could be so entertaining to kids in the 40’s and 50’s.”

A Satterthwaite drawing that I posted on my Facebook page brought recollections from readers about Mike’s Nut Shop. Feel free to see their stories or to add yours by clicking on the date and time: