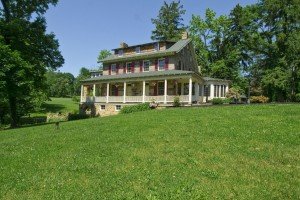 The former Hake distillery property near Emigsville is the site for an upcoming Preserving York Fundraising Picnic. The event, sponsored by Blake Stough’s popular history blog, is set for noon to 5 p.m.,  Sunday, July 22, 2012, on the grounds of the estate, associated with York’s most prominent 19th-century family, the Smalls. ‘Owned by the Hake family in the 1700 – 1800s, the property was a thriving distillery prior to its purchase by York industrialist Frederick M. Small,’ Stough wrote. The fundraiser will benefit Friends of Camp Security and The Farm and Natural Lands Trust of York County. (See view of the house’s side and rear below.) Also of interest: Transportation-oriented Emigsville a walkable York-area community with lots of community and York County, Pa., resident answers call for photos of Conewago Creek’s Elm Beach .

Blake Stough’s interest in York County history has shown up in his popular preservingyork.com blog and a Facebook group with the same name.

The sites offer a variety of insights about York County history ranging from an in-depth look of the Emig Mansion in Emigsville on his blog to a daily quiz in which Facebook group members weigh-in on the whereabouts of a mystery photograph.

Now followers of both digital offerings will meet for an old-fashioned picnic on Sunday, July 22.

It’s interesting that audiences grouped around heritage would actually embody a modern trend.

That trend is to harness the power of people with like interests to form an association. But notice that the audience who will be picnicking in July was gathered digitally. This is happening without the assist of a big-name community leader.

For decades, the model for gathering and energizing people – often to get something done – has been to present a prominent person with wealth as a campaign chairman. Or for fundraising purposes, a non-profit will fete some prominent person.

This has more or less worked, but the model is changing. Many of these prominent people with wealth are aging. I say more or less, because a community can become uninvolved if relatively few people solve the problems. To use a basketball metaphor, it’s akin to four players standing around because the team’s superstar has a hot hand.

But here comes the Web, which brings with it a healthy democratization.

So a single person with passionate interests in a topic can create an audience, trade information and enrich a community.

That model fits what Blake Stough is doing virtually online and actually with his picnic.

Those attending the event are asked to donate to two local groups.

The point here is that efforts such as Blake’s, multiplied across a community, can create and maintain a sense of community.

When you have community, you can bring forth change.

At this point – and no doubt forever – we need high-profile community leaders – those who will step forward to say the issues in our schools represent a moral crisis for community leadership.

But there should be hope that a new bottom-up model is emerging in which citizens, working digitally and without a bully pulpit, can gather people to accomplish good in a community.

Our venerable institutions, including the newspaper, should become students of – and involved with – the various community associations that the web brings together.

So I appreciate the fact that Blake invited me to the picnic and, further, to speak there.

About location and ticket prices, check out Preservingyork.com 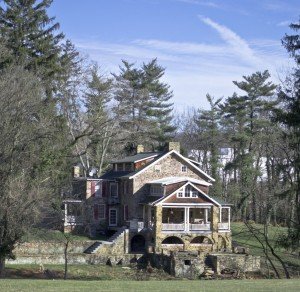 ‘The rear of the main residence features several beautiful arches and stairways,’ Blake Stough writes on his blog.  He noted an  ice house, trolley building, greenhouse, garden house, tennis court, bandstand, and gazebo stand on the estate today. Stough said the current owners are Steve and Sue Kohr. Steve Kohr is a local Realtor marketing the nearby Emig Mansion. He worked with the Farm and Natural Lands Trust to purchase his property.