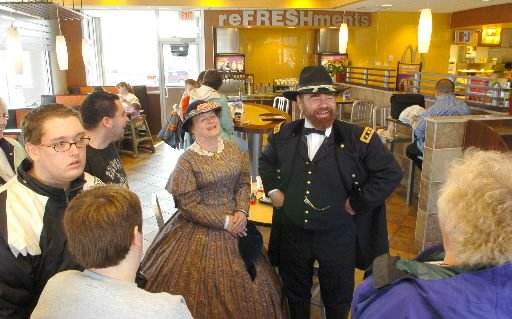 Larry and Constance Clowers, of Gettysburg, portray Ulysses S. Grant and his wife Julia. They do hundreds of programs each year, including a recent appearance in Hanover. Here, they play their roles during lunch at a McDonald’s in York.

When U.S. Grant visited York County recently Channeling the Grants, it wasn’t the first time he graced its borders.
Just as did his 21st-century re-enacting counterpart, the real U.S. Grant, the newly elected U.S. president, stopped in Hanover on his way to his first Gettysburg visit.
A defective locomotive caused the unscheduled stop.
(Grant was following the same path as Abraham Lincoln did five years before, moving along the Hanover Branch Railroad between Hanover Junction and Gettysburg. When one views the bucolic York/Adams farmland where the railroad ran, it’s hard to imagine that the world’s most famous people passed through there.)
We pick up the account about Grant’s Hanover visit from “Never to be Forgotten” local history book here:

“Grant makes a few remarks to an audience, largely praising the performance of Union commanders in the Battle of Gettysburg. Gen. George Meade directed Union troops at Gettysburg, while Grant was negotiating the surrender of Vicksburg in Mississippi. Grant later became Meade’s boss as military commander of all Union troops.”

Also of interest
Check out these stories and photos about the Civil War in York County.