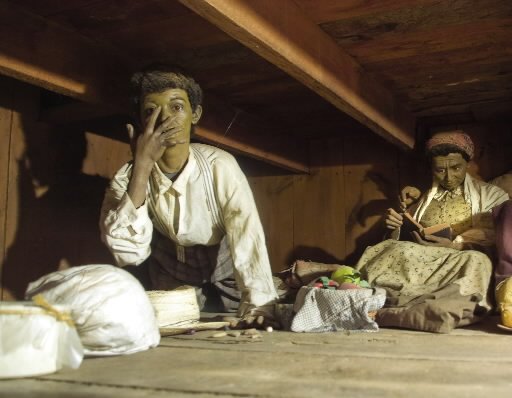 A crawl space is hidden behind a pantry shelf at the Dobbins House in Gettysburg, Pa. Mannequins demonstrate how fugitives might have hidden there as part of the Underground Railroad. Background posts: Amanda Berry Smith: ‘God’s image carved in ebony’, York/Adams’ interest in Underground Railroad grows, and Living historians bring spotlight to York’s Civil War story and Research needed to unearth Underground Railroad, Part II.

Research might be taking place that has not yet been put forth the public. But much of what is out there now is educated speculation because those involved in the unlawful moving of fugitives to freedom simply did not advertise their illegal activities.
Several years ago, the York County Heritage Trust, particularly trust researcher Lamar Mathew, put together the best of what was known at that time. As a Quaker and cautious researcher, Mathew had access to material perhaps not available to others.
The trust exhibit resulting from that research will be incorporated into a budding Underground Railroad Museum under development at the William C. Goodridge house on East Philadelphia Street.
Here is a summary of the Heritage Trust’s findings, as described in my “Almost Forgotten:”

The Underground Railroad operated in York County from the late-18th century to the 1860s. The system was a loose network of people — whites and blacks of various religious denominations — and places that moved runaway slaves north to freedom, according to York County Heritage Trust researchers.
By the mid-19th century, the network’s operations were described in railroad terms: those giving assistance — conductors; their homes — stations; escaping slaves — cargo. ‘Roads that crossed the Mason and Dixon Line north into York County as well as roads running west to east carried “cargo” through the county to scattered “stations” where the travelers could find food, clothing, medical attention and directions to another friendly house,’ Heritage Trust research states.
Fugitive slaves traveling from stations in Adams County often secured quarters among Quakers of Warrington Meeting. They would then cross the Susquehanna River at Middletown Ferry. The Willis farm, north of York, afforded shelter, and fugitives were reportedly hidden inside corn shocks in fields.
Other known Underground Railroad sites: The Jessop and Chalfant families provided food to runaways hiding under hay in their Springwood Farm barn, along Baltimore Pike. Slaves often would cross the Susquehanna at McCall’s Ferry in Lower Chanceford Township, pass through Christiana and then to Philadelphia. Others crossed at Wrightsville in railroad cars owned by William C. Goodridge, the noted black businessman in York, and boatmen sometimes rowed other across. Harriet Tubman reportedly visited York County two times, including to freed black Ezekiel Baptiste’s Newberry Township farm.