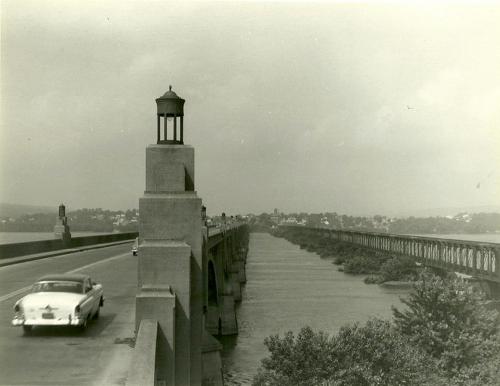 This is undated photograph shows Veterans Memorial Bridge, sometimes called the Columbia-Wrightsville Bridge. An urban legend persists concerning the 1930 Veterans Bridge. And by the way, the top of the iron bridge is flat. That because it was built with the idea that an upper deck would be constructed. Of course, it never was. For more: Second deck for vehicles. Background posts: A rehabbed, lit up Columbia-Wrightsville bridge: ‘It’ll really be a dramatic view’ and A 7th bridge? Pedestrian walkway may span Susquehanna River some day and Almost … a double deck bridge across the Susquehanna River.
A worker constructing the new bridge connecting Wrightsville with Columbia fell into freshly set concrete. His body was never retrieved, and he is entombed in a bridge support to this day. But his bootprint appears in one of the bridge’s concrete supports.

Jim Fahringer has raised this on-again, off-again claim in a comment to the recent post: Columbia-Wrightsville Bridge celebrates quiet birthday… .

Jim said the report about the worker has persisted among some in Wrightsville who lived in that day. He said he doesn’t believe the story.

I learned long ago to not discount such family stories and appreciate Jim’s comment.

But local folks who have studied Wrightsville the longest and hardest assert that the story is not true and is a fine example of an urban legend. They accurately point out that such stories are linked to construction projects in other towns.

To research the report would mean scrolling through miles of newspaper microfilm from the late 1920s, when the bridge was going up. No index for that period exists.

Newspaper indexes start in the 1930s and 1940s, thanks to Carl E. Hatch and his York College classes.

Until someone finds some evidence of this alleged accident, don’t go looking for any boot print on one of the bridge’s many supports.

(I addressed this urban legend a bit more in a previous post: Urban legend? The day a bulldozer sank from sight.)