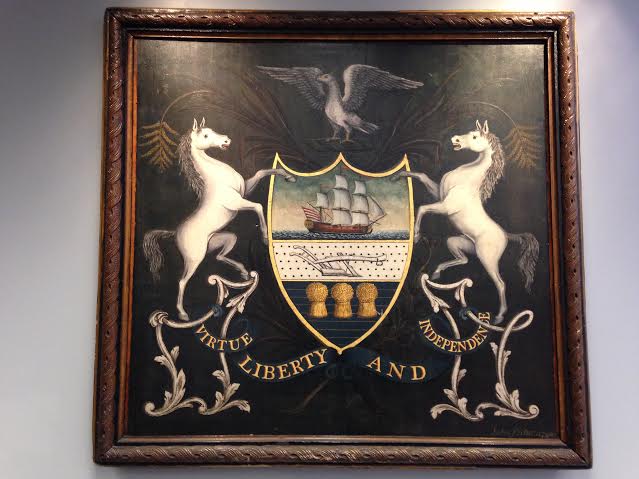 John Fisher’s Pennsylvania’s Coat of Arms is viewed as the most significant among many holdings in York College of Pennsylvania’s Archives and Special Collections. The archives, in the college’s Schmidt Library, are open for public use. The archives house the records of York County Academy (1787), York Collegiate Institute (1873), which became York Junior College in 1941. York College then grew out of the junior college in 1969. Also of interest: Check out this map of York College’s expanding presence.

York College of Pennsylvania’s Karen Rice-Young is the consummate archivist.

There’s always another piece of engaging information to put forth in the quest for understanding and meaning.

In an email exchange on the question-and-answer story (below) about the Archives and Special Collections that she heads, the archivist wrote: “I wished I’d remembered to include Hersh (Grier) as in Hersh Alley – the only reminder that YCP was part of his personal golf course at one time.”

It’s an intriguing point, indeed, that a piece of York College sits on York businessman Grier Hersh’s former golf course that later became the Country Club of York and then the Out Door Country Club.

All this adds to the story of York College.

As the golf courses moved farther into the countryside as York County grew, the junior college relocated from its College Avenue and Duke Street home in 1961 in search of more space on the former golf course south of York.

So the college no longer sits on its namesake College Avenue but along Country Club Road, which no longer is home to a country club.

The archives serve as a willing resource to inform and engage the public about this important York County institution. 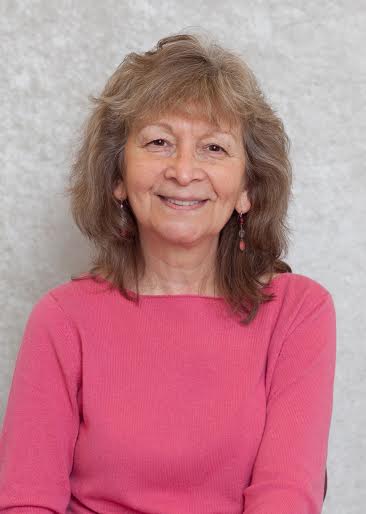 Q. York College is observing a milestone this year and next. What is significant about 2015 and 2016?

A. We have a yearbook called “Memoirs” from the York County Academy that is a century old this year. But, a bigger milestone occurs next year (2016) with York Junior College celebrates its 75th anniversary.

Q. What is the most significant holding in the Archives?

A. John Fisher’s 1796 Pennsylvania Coat of Arms. It was purchased by the York Collegiate Institute’s Board of Trustees to celebrate the school’s 50th anniversary. Fisher’s work hung in York’s first courthouse – its design is the first iteration of the Commonwealth’s seal. The painting shows two rearing white horses on either side of William Penn’s ship and above the motto, “Virtue, Liberty, and Independence.” It’s stunning!

Q. What book or artifact in the Archives interests you most?

A. Hmmmmm, this is a tough one. I most enjoy learning about the “First Families” of York such as Small, Farquhar and Schmidt, and others whose names appear on street signs like Kurtz and Smyser. Many folks from these families attended York County Academy or York Collegiate Institute, so I have access to some records that relate to them. I especially like learning where these families resided (Frederick Roe’s 1903 “Atlas of the City of York” is such a great research tool for this), and what local businesses they founded and/or worked for, etc.

Q. Other than students, who are the biggest Archives users?

A. Many members of the community are descendants of York County Academy/York Collegiate Institute students and are curious about those relatives’ early lives. Amateur genealogists and those interested in York’s history also come here to do research.

Q. Artist J. Horace Rudy’s art presence is in and around the Archives and the Schmidt Library, which houses the Archives. What is Rudy’s connection with York College?

A. J. Horace Rudy designed the first official seal for the York Collegiate Institute in 1918 (the same year he designed a seal for the City of York) and Dr. Charles Hatch Ehrenfeld,  then President of YCI, began a campaign to have stained glass windows designed by Rudy installed in the school building (J.A. Dempwolf was its architect). The designs of the windows are all different, and there are over 20 on campus (17 are in the library). Each window commemorates a particular class year, alumna/alumnus, instructor, or are memorials.

Q. What is the most frequent question you receive from Archives users?

A. “Is it true that (this or that on campus) is haunted?” There are many “urban legends” about the old Clubhouse and caretaker’s house (both razed in the 1960s), buildings that were part of the Out Door Club which sat here on Country Club Road. Along with these legends are those about tunnels running underneath the campus, girls dressed in Victorian clothes spotted in the Administration Building, and the spirits of a former dean and director of physical plant strolling around the grounds at night.

Q. The Archives hold more than books. What are some of the exhibits there?

A. Right now, we have Civil War era swords, a ca. 1941 RCA “Instantaneous Portable Recording and Playback” machine, York County Academy ledger and lottery receipts (1785-1792), a 1900 “System of Sewers for the City of York,” drawn up by T. Chalkley Hatton, Consulting Engineer, and a tribute Dr. Ray Miller. He was the last president of York Junior College and the first president of York College of Pennsylvania.

Q. What is the one thing people should know about the Archives?

A. Most important is that all the resources in this room – rare books, local history, college history – are available to everyone. The Archives/Special Collections Room is a comfortable place to carry out research, use primary sources, peruse files and photographs, and to enjoy. 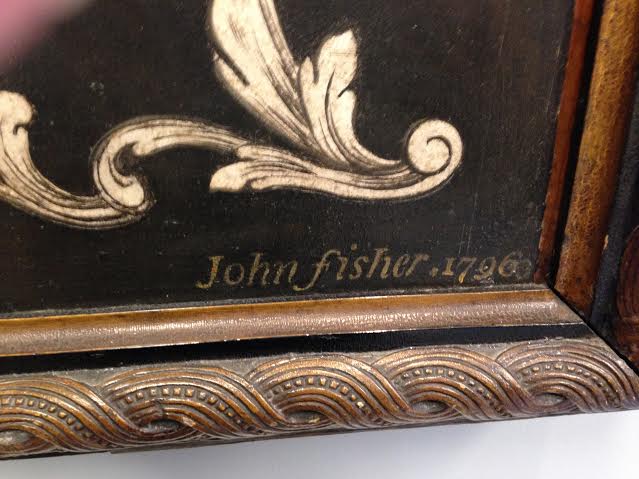 John Fisher signed and dated his Pennsylvania Coat of Arms.

Check out:
– Gordon Freireich’s ‘Singing the Presence of York College.’

– How a bird sees the original hub of York Colleges campus.