Upstairs at the Strand-Capitol: Life ‘Above the ceiling’ in York, Pa. 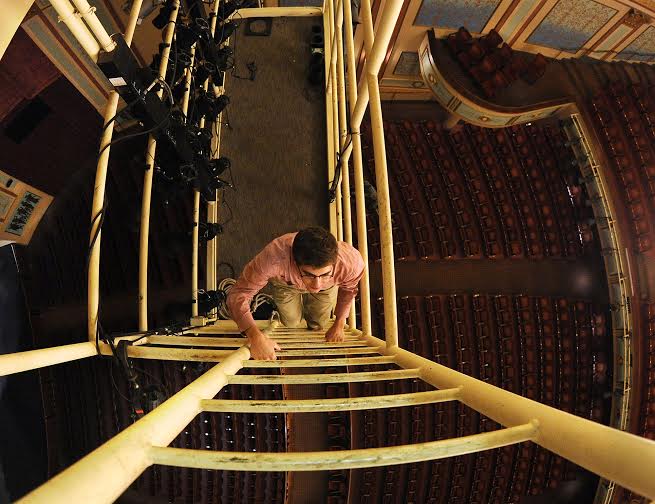 This ladder, with senior house manager Ben Spagnola aboard, ascends to the highest reaches of York, Pa.’s Strand-Capitol Performing Arts Center. The ladder is a continuation to the deserted steps project that have been the topic of several, very popular History Mystery quizzes on the York Daily Facebook page recently. Only these steps shown in these Jason Plotkin stills aren’t deserted. Just seldom used. The Strand was home to the recent York Symphony Orchestra’s sold-out concert debut of new director Lawrence Golan:  York Symphony + Lawrence Golan + The Strand = A1 entertainment. Below, see another Plotkin photo from above. 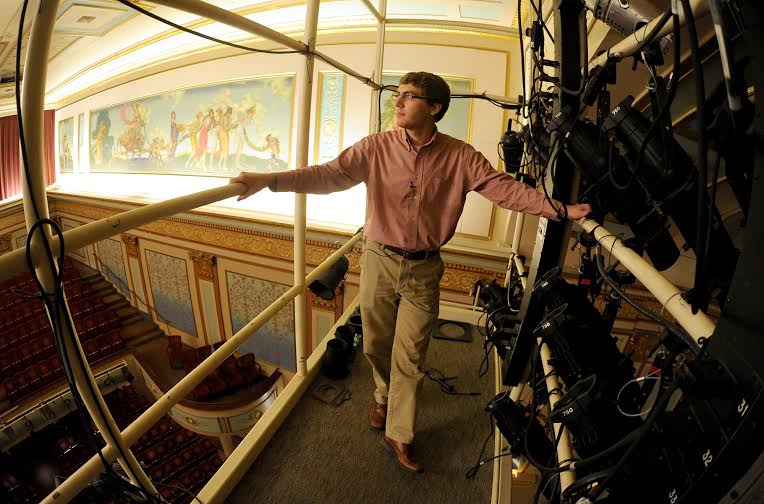 These two still photographs are captivating, but wait until you see a video tour, part of this YorkTownSquare.com post: “Above the ceiling.”  Most tours show the balcony and behind the stage but the ceiling tour is one on which ‘very few people actually get to go,’ Ben Spagnola said. Some of the ladders have platforms that allow climbers to catch their breath. Referring to one climb, the house manager says: ‘That one’s kind of scary because you don’t have a break.’

Calvin Palmer was born and raised in York, Pa. He moved from York in the early 1960s but remembers his days here.

He raised an interesting question:

“Growing up I remember a grocery store at the corner of Church Ave and Pershing Ave owned by John McClure. Was John a relative of your’s? I think he had a daughter Joan, who was close to my age.”

To my knowledge, I don’t have any relatives around here except for three families that moved here in the past 25 years. Maybe back in Scotland we came from the same village.

“My Aunt sent me a copy of “Never To Be Forgotten”, when it was published. It’s still on my coffee table.”

That was my 1999 book that is currently out of print, but available via the York County Library System.

Was beautiful but slightly chilly day to go for a hike on the Pole Steeple trail at Pine Grove Furnace @visitPAparks pic.twitter.com/J8PJYXAyT7 — William Supko (@supkophoto) October 20, 2014

Rich resource: This link to York County museums, archives and social media sites is updated and ready for you to enjoy and use.

History Mystery: If stumped, click on the goo.gl link below: