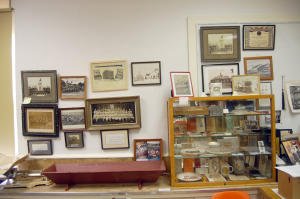 The York Weekly Record recently provided a sampling of unsung museums in the reaches of York County. Those community museums are invariably interesting and often display unusual artifacts. Here, the Codorus Valley Historical Society shows off a hog trough, made in Jefferson by the Auchey Foundry. The Weekly record states: ‘The business was started by Abraham G. Auchey which was operated by him and his sons. They were in business from 1866 to 1948 when the foundry was destroyed by fire. They also produced plows, threshings, corn planters and shellers. In latter years the firm specialized in, and was widely known for sash weights, hog troughs, and butchering furnaces.’ For a detailed listing, visit: Gobs of history sites.

Mike Beshore, mlbeshore@gmail.com, recently traced the deed to his farm to 1846.

“It was purchased that year (1846) by a George W. Laucks and subsequently transferred to his only son, Israel Laucks, then to S. Forry Laucks in 1919 who’s estate sold it in 1942.

“This puts our farm in the Laucks Family for 96 years. While I have not done any research on George, I presume he is the same George who’s name appears on the doors of the York Safe sitting in the office of The Recorder of Deeds, and we all know who S. Forry was.”

“While I’m excited about this ownership, does this give my farm any special
Historical Significance?”

I replied: “I think it’s something to be proud of – to be an early residence of the family that spawned Forry Laucks.”

Of course, the Laucks family, even apart from Forry, is one of York County’s most accomplished. The extended family recently had its reunion in York.

If you have any information on the Laucks family or on Mike Beshore’s property, please contact him.

Best history blogs: Check out this list of The 50 Best American History Blogs. (No, York Town Square isn’t on there. We knew you’d be wondering.)

Sharp as an Eagle (Scout): A Boy Scout’s Eagle project involved replacing the damaged graves of Civil War veterans in the Harrisburg area.

James Smith’s grave: Things went as planned on July 4 with the reading of the Declaration of Independence at York’s signer’s gravesite.

Forum of the day (a little tongue in check, just a little): The feds say mermaid – aquatic humanoids as one report states – do not exist: http://bitly.com/MAhNK2. Soooo, why would the government study mermaids? And do you agree with the feds’ conclusion? Background: Mermaid spotted in Susquehanna in 1800s: ‘Her hair was platted behind … cut short in front’

[brightcove video=”1443400432001″ /]
While on the topic of mermaids, a quest in the same mold is on for ghosts, and these ghost hunters focus their pursuit on area sites with historic authenticity.