Unthinkable in Newtown: York County can – and must – connect with grieving Connecticut community 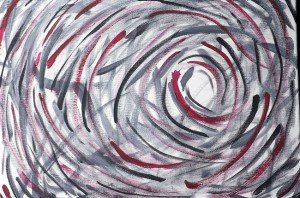 A York Daily Record/Sunday News story that assessed the shooting of Red Lion Middle School principal Eugene Segro nine years after that terrible day in 2003 carried a caption to this photograph: ‘ “This is what trauma looks like,” ‘ Kim Preske said of this piece of artwork she created to help her manage her PTSD.” Also of interest: School violence in Red Lion: When bad things happen to good towns.

The slaying of primary students in Connecticut is unthinkable.

The shooting of Red Lion Middle School Principal Eugene Segro was one of them – the most recent.

It overshadowed the intrusion by machete-wielding William Stankiewicz at the North Hopewell-Winterstown Elementary School. Eleven children and two principals were injured by the madman. If the principal had not intervened, well, one shudders to think.

The earliest-documented case of school violence before the machete attack came in 1970 at William Penn High School, which was really an extension of the race riots the previous two summers.

So York countians can – and must – connect with the grieving folks in Newtown in whatever way we can. Post on the Facebook sites of the victims, for example.

Some links to past stories and photos of pain and suffering in York County’s past: