U.A. Whitaker’s AMP plant in Glen Rock, Pa.: ‘The landscape reminded him of the rural Midwest’

Picturing History examines this obscure building in Glen Rock, Pa.  Actually, it’s has an interesting past as an early home to AMP in Pennsylvania.  AMP moved work to Glen Rock in 1941, according to Jeffrey L. Rodengen’s ‘The Legenda of AMP’.  He wrote, ‘… (Owner U.A.) Whitaker contracted with Paul Shepperd owner of a factory in Glen Rock, Pennsylvania, just south of York. White was familiar with the town from his American Machine and Foundry days, when AMF had its Glen Mixer Division there, and he liked the area. The landscape reminded him of the rural Midwest, where he was raised, and the local workers seemed to adhere to a traditional work ethic.’  The photo at left shows Glen Rock’s AMP plant in the 1940s or 1950s. At right, Baumiller Automatic Screw & Precision Machined Parts operates today on the site of the former AMP plant. Also of interest: Details about the maker of electrical connectors’ locations in York County and Learn about AMP and AMF, Glen Rock’s alphabet soup.

+++
This is interesting: Friends of Old Annville will show rare 1950s local film footage at Lebanon Valley College. Check out a local show and tell below: 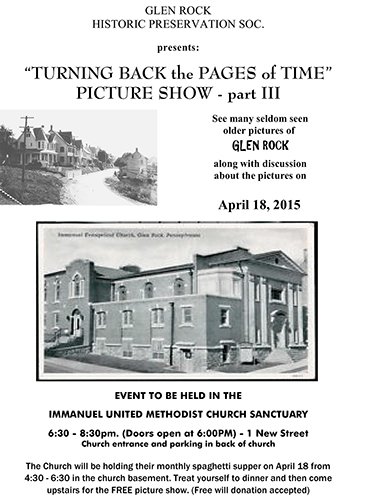 York hero: From the Greatest Generation … .

History Mystery: Facebook fans are not remembering this educator, one of the most accomplished to come from York County, Pa.