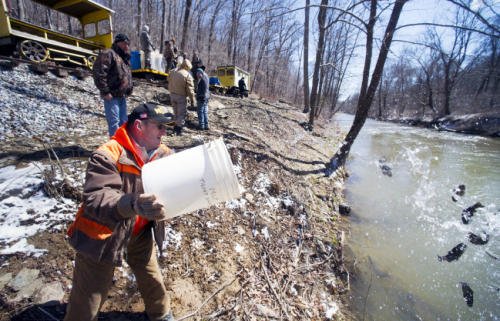 This is a pretty neat scene tying together two York County, Pa., institutions. Yes, it’s a stocking for trout season a couple of miles north of Muddy Creek Forks. How did they to this remote spot on the north branch of Muddy Creek? Here’s comes the second institution: The Ma & Pa Railroad. The fish were hauled there aboard a Ma & Pa Railroad Heritage Village rail car. So this remote railroad – an old connector between York and Baltimore – is put to commercial use again – kind of. (See more York Daily Record/Sunday News photos of thestocking  for the trout season’s opening day.) Also of interest: Fisherman about Codorus Creek in York: ‘Was pleasantly surprised by the variety of fish’.

The Friends of Camp Security spearheaded the acquisition of land on which prisoner of war Camp Security stood in the American Revolution. But the group did not stop there.

They’re seeking a grant to dig for evidence about Camp Indulgence, believed to have operated near Camp Security. That camp held prisoners as well as women and children.

Check out their efforts: Camp Indulgence. 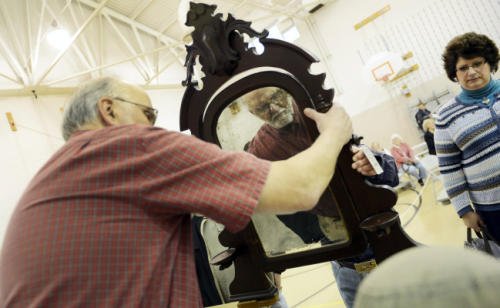 The Manchester Township Historical Society sponsored an antique appraisal earlier this week. Here’s one finding, according to a YDR story on the event: ‘John Shuler, of Dover, was told his 1840s Kentucky rifle made by John Shuler of Liverpool, Perry County, was worth between $2,000 to $3,000. His father handed it down to him, something he has owned for 45 years.’

At Williams Grove: This auto racing track just northwest of York County is observing its 75th anniversary this year. Check out the Pennlive report on that big birthday.

Old warship:  What’s longer than a football field, rusting and going to stay docked in its place for the time being? The USS Olympia, a mainstay at Independence Seaport Museum on the Delaware River in Philadelphia.

Back to the 1700s: This blog spends a lot of time in the 20th and 21st centuries, so I work to get in 18th and 19th century pieces. Such as the Camp Indulgence blurb above and this YDR Facebook query: