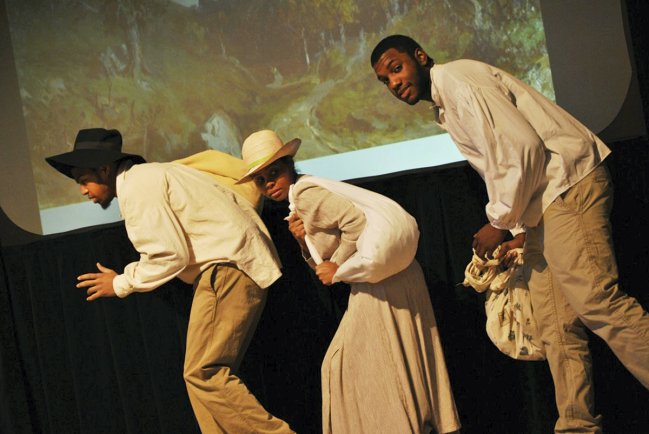 Central Pennsylvania’s PennOwl Productions perform ‘Susquehanna to Freedom: The role of the Underground Railroad on the Susquehanna River.’  The theater group will perform playwright Dorothy King’s production on Sept. 20 at York College. A presentation on the performance by King, a York native, at the York County Heritage Trust came a day after author Jeremy Courtney captivated an audience at First Presbyterian Church with a presentation on his non-profit agency’s work in making heart surgeries available to children in Iraq. As an aside, York countians have many opportunities to hear provocative presentations such as these if they link in with the newspaper or YDR.com. Also of interest: All Underground Railroad posts from the start.

Last weekend, people came together for two unrelated but instructive events on the same block in York city.

Different buildings. One was a church, the other a museum.

Both were highly attended, even against the York Fair, football games and other conflicting opportunities.

They were different moments, but they had a common theme: The power of individuals to make a difference.

In his presentation, sponsored by Hearts & Minds Books, Courtney told about the early stages of this service to children – a time in which an Iraqi friend asked him to heal his cousin’s heart.

That seemed impossible, Courtney said, given the chaos in Iraq, with its damaged infrastructure and dispersed medical workers.

But the idea took seed, and Courtney’s nonprofit, Preemptive Love, now arranges for 24 pediatric heart surgeries in about a week.

To do this, the group forges a coalition with ethnic and political groups of all stripes.

A working government is necessary to shore up infrastucture in Iraq, Courtney said, so Preemptive Love and other services can operate. But he made it clear that individuals volunteering their services are a key to Preemptive Love health care work in Iraq.

So we have Jeremy Courtney and his wife, Jessica, with an idea that is making a difference in a far-off, war-torn world.

Farther east on East Market Street the next day, York native and playwright Dorothy King told an audience at the York County Heritage Trust about how she gathered information for PennOwl Productions’  “Susquehanna to Freedom: The Role of the Underground Railroad on the Susquehanna River.”

She traveled to towns up and down the Susquehanna to gather stories about those who operated stations on the Underground Railroad or otherwise aided former slaves in their quest for freedom.

Her father was a freedman, whose family lived just north of the Mason-Dixon Line in Shrewsbury.

“Our house was one of the main stations of the Under Ground Railroad,” she wrote years later. “Sometimes the excitement was so high we had to be very discreet in order not to attract suspicion. My father was watched closely.”

“Susquehanna to Freedom,” to be performed Sept. 20 at York College, tells about people of different colors working individually and together to aid people in their pursuit of freedom.

Underground Railroad workers did not seek government help. In fact, they operated outside the scope of government.

Their brave participation in the Underground Railroad was an act of civil disobedience. Indeed, they could be prosecuted criminally for going against provisions of the Fugitive Slave Law of 1850.

That controversial law required escaped slaves to be returned to their owners in slave states.

So both weekend presentations on East Market Street provide many lessons. One is the power of the individual to impact change. We simply don’t have to count on government to make things happen.

Another is that after individuals move ideas along, coalitions that cross cultures, build trust and seek third ways in the political sphere can be effective.

“I don’t lean left or right,” Jeremy Courtney said on ChristianBooks.com. “I lean in. I lean forward, because that’s where love lives.” 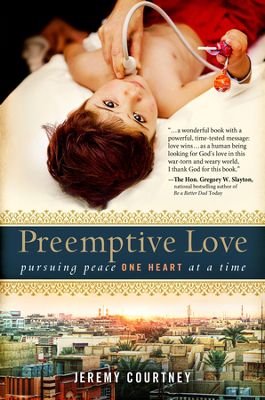 The publisher’s description for ‘Preemptive Love‘ is so well-written and descriptive that, well, here it is: ‘Preemptive Love invites you to walk alongside Jeremy Courtney and his family on their quest to pursue peace and mend hearts in a broken world, learning what it means to go beyond good intentions and risk everything for something more: a lifetime of tomorrows for children who were sentenced to death, relationships restored, and violence undone. ‘In Jeremy’s own words, “I no longer accept the zero-sum worldview that says we cannot simultaneously be on the side of the Democrats and Republicans; Americans, Israelis, and Ira­nians; Jews and Palestinians; Sunnis and Shias; Arabs, Kurds, and Turks. I choose them all. I don’t lean left or right. I lean in. I lean forward, because that’s where love lives. Violence unmakes the world. Preemptive love unmakes violence.’