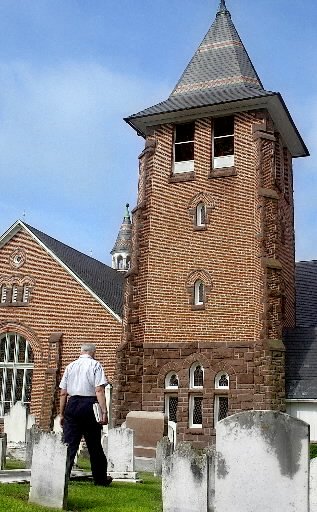 Don Miller, St. Jacob’s Church historian, walks through the cemetery where members of the union church, Lutheran and Reformed (United Church of Christ), are buried. The cemetery, a beautiful church building, a nearby picnic grove and bandstand and scenic setting encourage a Sunday afternoon stroll, a longtime York County custom. St Jacob’s, also known as Stone Church, is one of two remaining union churches in York County. (Update, 4/4/14: This church is no longer a union church, leaving one in York County, Dub’s, near Lake Marburg.) Background posts: York County’s own Civil War – Part IV and The things you learn from reading local history.

The union church arrangement in York County was not a case of congregations banding together for collective bargaining with God or anyone else.
But the movement gave a nod to York County and Central Pennsylvania congregations developing a practical solution to a thorny problem.
The movement, stemming back to the 1700s, saw German churches – usually Lutherans and German Reformed congregations – sharing buildings and maintenance of those structures… . 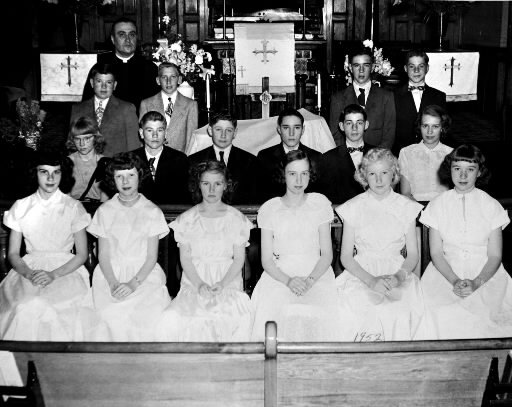 This photo shows the 16 teens confirmed by the Rev. Kenneth Ehrhart of the Lutheran congregation at St. Jacob’s ‘Stone’ Church in 1952.

Sometimes, the congregations would meet on alternating weeks. Others met in different services on the same Sunday and shared a Sunday school.
In his authoritative “York County Lutherans,” Charles H. Glatfelter wrote, “Most of the 32 congregations in 1776 were parts of a union church arrangement, a much misunderstood and criticized phenomenon about which many people know little or nothing.”
He listed several reasons for union churches to form:

– Lutheran and Reformed families intermarried.
– Farm families had limited liquid income, until larger markets could be found for their products.
– A shortage of pastors.

The union church at Kreutz Creek was the first.
One by one, the 32 unions broke up.
Today, two remain – St. Jacob’s (Stone) Church near Brodbecks and St. Paul’s (Dubs) Church near Codorus State Park. St. Jacob’s voted to leave the union in 2004, conditional on finding land for a new church. So far, the two congregations continue to meet in the beautiful church building.
In a sense, the congregations are back where they started. Neither apparently has enough wherewithal to go separately.
And in the 20th century when many congregations went their own way, each church could draw from growing numbers of suburbanites who sought mainline, liturgical churches. Newcomers to York County today come from a variety of religious backgrounds and often are drawn to Grace Fellowship and other non-denominational churches.
Undaunted by the pending split, the Stone Church congregations celebrated their 250th anniversary in 2006, as explained in the following story from the York Daily Record/Sunday News (10/26/06):

St. Jacob’s ( Stone) Union Church in the Glenville area of Codorus Township marked its 250th anniversary this year.
The church, when established in 1756, was one of a handful of union parishes in Lower Windsor and West Manheim townships, and possibly in Hellam and Bermudian townships, according to “A History of St. Jacob’s (Stone) Church,” by Charles H. Glatfelter.
Most of the early settlers of Codorus Township were Lutheran and Reformed Germans who first held church services in homes and barns.
They realized that joint Lutheran and Reformed churches would mean shared costs as well as shared benefits.
The original church was built of logs in 1761, on land owned by the Penn family.
The church trust applied for 50 acres and a deed was issued in 1803.
While the church was first known as Codorus, records from 1769 show it referred to as Jacob’s Church. Sometime after 1843, the name changed to St. Jacob’s, but it is probably best known as the Stone Church.
This name first appeared in print about 1840 and might come from the second church, built in 1790 of stone to accommodate a growing congregation.
A third church, made of brick, was built in 1855 and later damaged by lightning.
The present church was completed in 1889.
In 1917, the church paid $200 for two acres for a picnic grove. The church’s Sunday school picnic, thought to be one of the oldest still going, is held annually.
The traditional Memorial Day Service to decorate the graves of veterans began in June 1894 with local representatives of the G.A.R. and the Brodbecks Band. The band continues to be part of the annual service.
From the beginning, one pastor served a number of congregations within a charge.
The Lutheran congregation became independent in 1972 and the United Church of Christ in 1981.
The UCC congregation, with more than 280 members, is served by the Rev. Jason Leader.
More than 460 Lutheran members are served by the Rev. Paula Murray.
The Lutheran congregation voted to leave Stone Church in 2004 because of declining attendance but won’t relocate until they purchase land. A committee continues the search for a suitable plot.
The congregations share their 9 a.m. Sunday school each week but alternate their worship service times every other week.
This Sunday, the UCC congregation worships at 7:45 a.m. and the Lutheran congregation at 10:15 a.m. The following week, the schedule will be reversed.