Two ‘connectors’ would make list of York County’s most influential 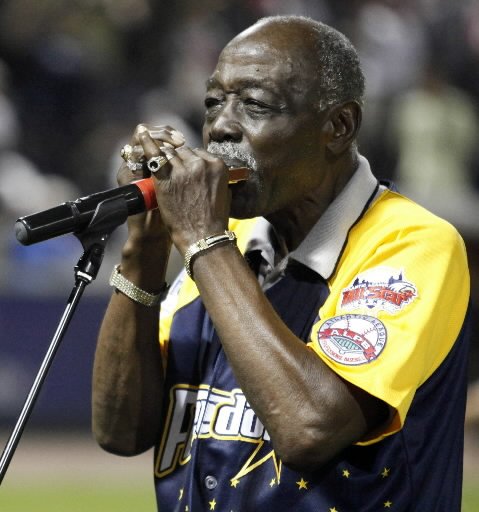 Voni B. Grimes plays his trademark harmonica at a York Revolution game, one of several such moments before the York team’s fans. Background posts: Richard Nixon’s visit to his namesake park sparks memories, At the blind center: ‘The bees have been enjoying this garden, too.’ and Articles of Confederation don’t get no respect.

Borrowing from Time magazine, the York Daily Record/Sunday is compiling a list of York County’s most influential people.

The names of philanthropic industrialists and businessmen no doubt will make the list.
Borrowing from Malcolm Gladwell’s “The Tipping Point,” I put forth in my Sunday column the names of two ‘connectors’ – Luther B. Sowers and Voni B. Grimes – for that list… . 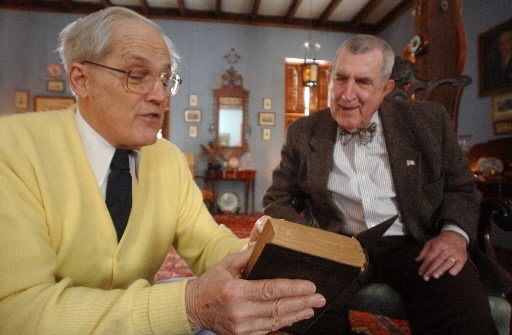 Luther B. Sowers, right, is seen here with fellow history enthusiast Jim Rudisill, left.
(No, having a middle name starting with “B” is not a prerequisite to be so nominated. In case you’re wondering, Luther’s “B.” is short for “Boyd” and Voni’s “B” stands for “Buster.” In case you’re further wondering, Voni is short for Vonidoe, his uncle’s name.)
What’s a connector and why do Luther and Voni qualify for the list? Here’s my column with an explanation (nominate your own by commenting below):

Luther B. Sowers and Voni B. Grimes are modern-day Paul Reveres.
But instead of engaging colonists about certain invading red-clad soldiers, they constantly connect people with ideas and opportunities that better York County.
Their effectiveness as community connectors may earn them a spot on the list of 25 most influential people in York County.
Malcolm Gladwell’s best-selling book “The Tipping Point” inspired this Paul Revere comparison to these two community icons who so effectively connect people and ideas.
It’s no accident that history remembers Paul Revere and not William Dawes, who also warned those in the Boston countryside about the British advance in 1775.
Gladwell argues that Revere knew everybody and everything and was always in the center of things. Dawes lacked these qualities.
Revere was, thus, the perfect person to spread word about the redcoats.
“When he came upon a town,” Gladwell wrote, “He would have known exactly whose door to knock on, who the local military leader was, who the key players in town were. He had met most of them before. And they knew and respected him as well.”
Luther Sowers and Voni Grimes spread the word, too. Or several words. Community engagement. Caring. Sacrifice. Good will.
People go to them all the time:
— Can you talk to prickly person X who is a member of Group Y to ensure that the meeting with Group Z is productive?
— Can we hold an event in your honor to raise money for organization X?
Sometimes, they come to you:
— I notice you’re not signed up to attend event Y . . . .
— Can you give a talk on Topic Z? People need a gentle reminder about its importance.
* * *
Both Sowers and Grimes are octogenarians.
They both have the Clintonesque quality of making you feel like you’re the only one on earth when they talk with you.
Both have resumes of service that would consume enough paper to keep Glatfelter’s Spring Grove mill busy for a while.
And both overcame adversity early in life.
Ten-year-old Luther Sowers lost his father to an auto accident. His brother, Paul, was an early casualty of World War II. Luther entered the service a year later.
Voni Grimes’ family moved to York from Bamberg, S.C., when he was a youngster. After several years, his father moved away. Voni worked several jobs to aid his mother and siblings before also going off to war.
Sowers returned from the service, became a teacher and then moved into administration at York City Schools.
Grimes came back, labored at Cole Steel and then went into administration at Penn State York.
If anything, their roles as community connectors escalated after their retirements.
It’s not just the number of people they know, a point Gladwell makes about connectors. It’s that their layered interests touch a diversity of people across the community.
For years, Sowers has consistently served on 15 or more boards or advisory positions: Memorial Hospital, YMCA, West Chester Alumni Association.
He’s interested in sports. History. Gardening. Church work. Bowties.
He’s a Springettsbury Township native, worked for years in city schools and ended his career as superintendent in the remote South Eastern School District.
One such board, the York County Academy Board of Directors, would appear to be the most thankless of all civic functions. It dealt with paper, some bequests, but no readily visible product. The academy, a forerunner of York College, had ended its solo act when Sowers was a youngster.
And Voni Grimes wore a blue collar at Cole and changed to white at Penn State.
He is a senior statesman in the black community – indeed, the entire community – and a past governor of the predominantly white Lions District in this region.
He was at or near the founding of Access-York, Community Progress Council, York County Parks, among others.
He’s a black belt in judo. He regularly performs on the harmonica. The College Avenue gym, where he still works out, is named in his honor.
Their careers as volunteers intersect. Both are active in York County parks. Both are Masons. Voni’s Lions Clubs regularly support Luther’s former ForSight Vision Board. The Voni B. Grimes gym was originally built for York Collegiate Institute, another forerunner of York College.
Both have spent their lifetimes promoting education. Sowers has a doctorate from the University of Pennsylvania.
Voni proudly counts to 23 years of schooling, including senior high school. The informal continuation of the title of his forthcoming memoirs “Bridging Troubled Waters” is “through education.”
The point to all this is that Luther and Voni regularly touch lives, up and down and across the community.
Further, they have “Maven” blood in them, another “Tipping Point” term for people who know what they’re talking about.
Not all connectors are as astute and not all Mavens are as well connected.
Luther and Voni are both, operating across the community linking people and ideas that work together for the good of the community.
When they speak, people listen.
Just as all of America did to Paul Revere’s cries.