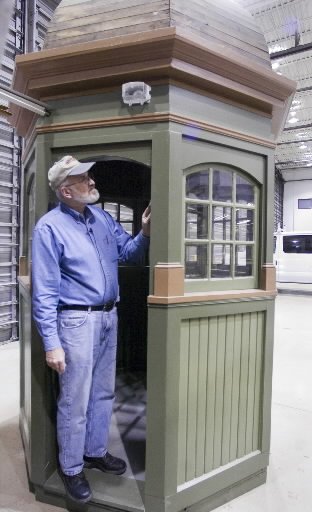 This kiosk was used as a trolley dispatcher’s office in Continental Square. The trolleys stopped running in 1939. The kiosk, needing extensive repairs, has been in a city shop until funds become available for its restoration. Background post: Trolleys helped make Avenues sought-after locale.

And another thing about York’s trolleys.
It’s about the kiosk, the trolley dispatcher’s office, sometimes called the conductor’s station, that adorned the square’s northeast corner for years.
In his “Time of the Trolley” paper, Dan Meckley provides some facts:

– It was nicknamed “Teapot Dome.”
– After the trolley service stopped in 1939, it was moved to the car barns on the Avenues.
– Donald R. West acquired it and moved it to his parking lot at 101 S. George St.
– Attoney J. Eugene Stumpf bought it from West and planted it in his back yard as a playhouse at 1465 Whiteford Road.
— The city received ownership and turned it over to the York County Vocational Technical School for refurbishing.
— It was put back on the square until removed because of its poor condition in 2004.
— An anonymous donor recently has commissioned the city to restore it.
Will it go back on the square or be moved elsewhere? To Sovereign Bank Stadium?
A York Daily Record article from 2006 gives some more details on the popular little building:

Jim Gross has received about 20 phone calls from people seeking to rescue an old trolley kiosk.
Since a news story appeared about the turn-of-the-century structure moldering in storage, a number of groups have contacted the city about rehabilitating it.
The city’s public works director wouldn’t say who has come forward, but he said he’s met with a number of groups who have toured its storage facilities.
The plan would likely be to return the kiosk to its former home at Continental Square.
“It’s definitely an icon for the square,” Gross said. “It’s part of the history there.”
The kiosk dates to the late 1880s when streetcars ran in downtown York. It was originally a conductor’s station from the late 1880s to 1939, when trolleys were replaced by buses.
Through the years, it was used as an information booth, police substation and a mailing place for letters to Santa.
For now, the octagon-shaped, domed-roof kiosk remains in storage in the City of York’s maintenance shed, where it has sat since October 2004.
City officials hope someone with either the craftsman skills or money will be able to restore the building’s rotted window sills, warped floorboards and copper roof. Gross said if an organization assumes responsibility for the rehabilitation, the building could be spruced up and out of storage by spring or summer.
“Once it’s restored, it will be in good shape for another 20 years or so,” he said.
The city does not yet have an estimate on the cost to repair the structure, but Gross said it will take “a lot of labor, no doubt.”