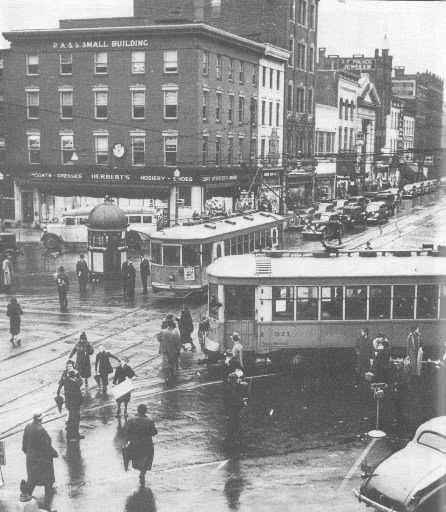 Trolley tracks entered and exited York’s Continental Square in the heyday of York County’s far-flung street railways in the first third of the 20th century. The tracks led to York’s northwest area – the Avenues, long one of the city’s most desirable neighborhoods. The P.A. &  S. Small site later was occupied by Murphy’s and still later by the York County Chamber of Commerce. Today, a glass-paneled building sits on that northeast corner of the square. Also of interest: At one time, York’s 5 & dimes lived up to their names.

The Avenues area of York has long been a desirable place to live.
A York Sunday News story, Avenues living, tells about how the neighborhood was founded in the 1880s and noted that wealthy industrialists and businessmen were early occupants.
And one of the attractions that made the neighborhood ready-made to the rich and famous was the trolley system operating in an electrified state between 1892 and 1939… .

It was but a short ride from the Avenues into York’s downtown.
Not that all the owners of the large Victorians in the Avenues worked in the downtown. The neighborhood actually bordered large industrial complexes with lots of relatively well-paying positions, particularly York Manufacturing Co. and S. Morgan Smith.
And the trolleys didn’t just carry passengers in and out of the neighborhood.
The noisy cars lived there.
Extensive buildings for trolley upkeep, parts and storage stood in the vicinity of the Avenues. For example, a large car barn stood on Maryland Avenue.
The Avenues remain a handsome place, albeit challenged by recent crime. Just as the execs moved out of the downtown to the Avenues 100 years ago, they’ve done the same in the present-day Avenues. In both cases, middle class residents took their place.
The fact that this neighborhood was so vibrant in its early 20th-century heyday, despite rattling trolley cars, ear-piercing factory whistles and clanging rail cars servicing nearby industrial plants, shows that mixed-use neighborhoods worked well.
Still do.