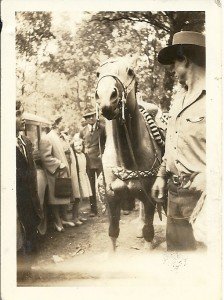 The notation on the back of York County, Pa., educator LoAnn Clark’s photograph reads: ‘Trigger, Roy Rogers horse.’ Roy’s not in the photograph, but he was at Hellam Township’s Valley View Park, too. And he reportedly got on the stage at this longtime country-and-western venue with Roy. LoAnn emailed some information from her mother’s cousin, Norma Neuman about this moment:  ‘Norma remembers going to Valley View to see Roy Rogers. She said it was about 1939. She wasn’t certain of the exact year, but she was 10 or 11 at the time. Roy was wearing a black shirt, and she believes a white scarf and white hat. His name was embroidered on the shirt in white. She said he was giving out autographed photos and she got one, but she doesn’t know if she still has it.’ This discussion started after Yorkblogger Joan Concilio put forth a Jim Goodling photograph and other memories of Valley View Park. (Click on the photo to enlarge.) Also of interest: Valley View Park brings memories: ‘We grew up on country music’ .

The York Day Nursery is another of those York County icons that was founded in the Great Depression. 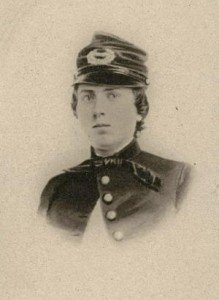 The U. S. House approves granting Union Lt. Alonzo Cushing with the Medal of Honor for bravery at the Battle of Gettysburg, according to the Hanover Evening Sun.

Blog post of the day: Yorkblogger June Lloyd keeps up the posting about Rebecca at the Well, that long-gone fountain from Penn Park. This time, June is pondering: What’s that on Rebecca’s head?

Forum of the day, I: Meteorologists say a tornado touched down in York County last week. Some say we’ve always had tornadoes, and the record proves that. But still, doesn’t it seem that our weather is out of synch? Background: We got two tornadoes in two weeks in 2001.

Forum of the day, II: Jimmy Bear, over at The Exchange, is looking for information or the whereabouts of a mural that was in a bank in downtown York. Maybe you can help.

York’s Gold Star Garden is to be unveiled today.