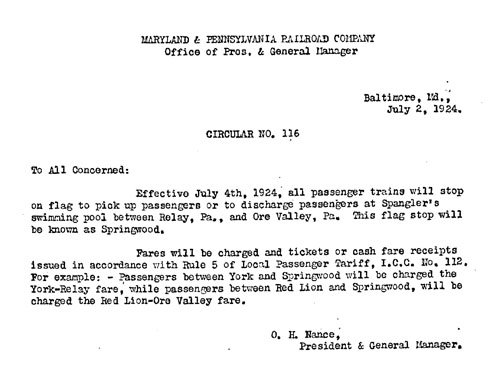 The Dagger is a website that covers Harford County, Maryland.

One of its bloggers covers issues in the Delta area of southeastern York County.

When you cover that area, it’s inevitable to look in on the Ma & Pa Railroad, or what remains of such.

The Ma & Pa, that old curvy Baltimore to York rail line, is intriguing enough. But this post, written by Told Holden, involves a Delta-area trestle, certain to bring up memories of many who played around these treacherous bridges as youngsters.

“As a kid I would walk the rails from the slaughter house, out and around the bend of the tracks to the ever-so-long wooden trestle as the line headed north to its final destination of York. In the distance was the long trestle I would try to walk across after a train crossed. It still looks as long as it did when I was a kid. Moss has aged the wood…the rails long since taken up… a few large trees have fell across parts of it, and still it stands, beautiful and strong and bold as ever. I remember slow moving freights at the station, loading or unloading, and I would race down Bunker Hill road so I could get a good look as they crossed over the trestle.”

Read the whole thing at Massacre.

And here’s a post, from yorktownsquare.com, about another Ma & Pa trestle near Red Lion: Old Ma & Pa Railroad trestle may again carry passengers – on bicycles – some day.

And here’s a post that brings back a rail structure more interesting that trestles – tunnels:

York Township’s long-closed Springwood Park spawns memories and Where was the site of Camp Betty Washington, along the road so named? and So, can you find long-gone Springwood Park in this photograph