Volunteers often work on historic Stewartstown Railroad’s station and rail line on weekends in this southeastern York County town. So in the aftermath of last week’s ice storm, they saw up branches that came down atop the station. It was just a different way of working on the railroad, as this York, Pa., Daily Record/Sunday News story indicates: Stewartstown station hard hit by ice storm. Also of interest: Wouldn’t you know it? Icepocalypse is our unlucky 13 – winter storm, that is. 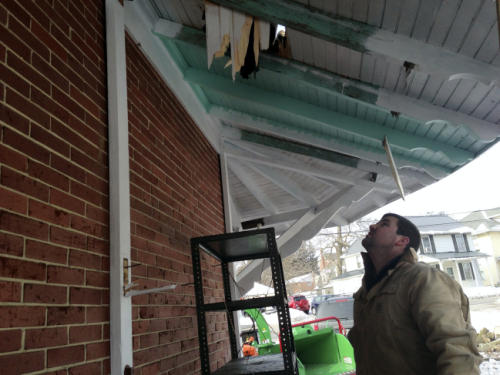 This scene has been playing out all over York County in the aftermath of the ice storm. But this one hit a historic building – the 129-year-old Stewartstown Railroad station, a landmark and tourist destination. Also of interest: What it was like aboard the Stewartstown Railroad.

Gail Hoke read a recent York Town Square post on Besser’s, a pitstop between Shrewsbury and York on the Susquehanna Trail.

She emailed an interesting note:

“For your younger readers (under 60) they could have been taught that in this period, there were no motels; just tourist homes and small camper-style “cabins, such as Bessers.

“Of course, there wasn ‘t that much demand because car traffic very light (car ownership quite small). Post-WWII, changed that..and everything else!”

Lancaster postcards: We know York County has a postcard club. Not surprisingly, one operates in history-rich Lancaster, too.

Lancaster County Postcard Club is meeting at 7 p.m. on Feb. 17 at the Farm and Home Center in Lancaster on Arcadia Road off the Manheim Pike.

This is a member participation meeting: “A Favorite Postcard.” For details, check out: LC postcard club.

Top of his class: Dominick Argento is a York native and Pulitzer Prize-winning composer. This Library of Congress site places him prominently in the 1950s in its Songs of America feature. The LOC describes this Songs of America as: “A timeline of American songs and historical and cultural events.”

Days gone by: Here’s a little reminder that we do have warm days around here, courtesy of the I grew up in Manchester/Mount Wolf FB page.