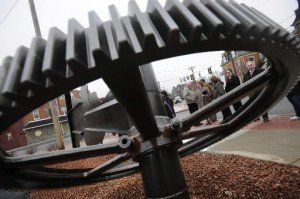 The Industrial Plaza of York has been around since the 1990s, but it now has a sign, unveiled this week. The sign, showing gears and cogs, is made from repurposed pieces of scrap metal. It’s a visible ‘sign’ of consultant Roger Brooks’ notion of forging York County’s industrial arts and design heritage into the theme, ‘Creativity Unleashed.’ Making art from scrap is indicative of efforts in York to turn its heavy-industry past into a service-0riented future. Fittingly, the Industrial Plaza is the former York Corporation/Borg-Warner complex, which made huge refrigeration equipment with thousands of artfully made, precision parts. (See additional image below. Click on this photo to enlarge.) For more on Brooks’ concepts, check out: Obscure F.O.E. building to become colorful beacon of York, Pa.’s renaissance and The art and soul of York County from the air.

Who was Mrs. Link from York?

Ruthe Craley is looking to answer that question.

“In a Gettysburg Times column about things happening 100 years ago, they spoke about the College Orchestra playing a benefit performance and a ‘Mrs. Link from York’ also appeared.

“My father (noted Gettysburg College history professor Robert B. Fortenbaugh) was in that orchestra when he was at College …. people can’t imagine that part of  his life … and I am trying to reconstruct as much as  possible. Can you identify her and  why she would have been on the program?”

If you can help Ruthe, contact her at: ruthecraley@embarqmail.com.

Then Ruthe provided an intriguing bit of information:

“Have I ever told you that I was baptized at the Hotel Yorktowne? Just a bit of trivia of no importance….. undoubtedly a first and only.”

We need to find out more about the story behind that.

Politics as unusual:  The York Daily Record/Sunday News is working with York College on a candidate’s night in which the public will talk and the candidates will listen. Check out the YDR Insider post: York County ‘Candidates Night to Listen’ will help develop a citizens’ agenda. Meanwhile, the YDR/YSN has launched a new elections/politics page in this presidential election year.

The Reb yell: Gary Heiland,  garyprr@comcast.net, passed along a YouTube link to Confederate veterans reenacting their famous cry as they rushed toward the men in blue. Gary wrote: “think about 10,000 men doing this all at once.” 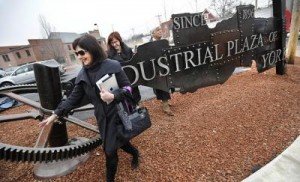 The new sign in front of the Industrial Plaza of York. For a neat video of the unveiling by YDR/YSN’s Jason Plotkin, visit: Sign dedicates industrial plaza for York