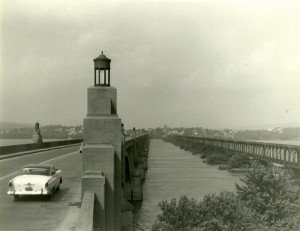 A Wrightsville resident raised an good question about the railroad that ran from York to her home borough.

Was it there in the Civil War era? The short answer is, yes.

That railroad made the Columbia-Wrightsville bridge, its conveyor across the mile-wide river, a coveted target of the Confederates in their 1863 raid across York County the river.

“If you are in Wrightsville traveling west to York and you continue through the traffic light at Rte. 462 and Cool Creek Road, you will see a road on the left named Bairs Mill Road.  It is just behind the golf course.  If you turn left on that road and travel a short distance, you will see a pretty stream with falls, a bridge, and an old mill building.  When you cross the bridge and look off to the left you will see an old railroad bridge.
“A short distance farther along the road you will see two long lines of trees and an empty space between them where the railroad line used to be.  We are curious about where that railroad line ended in Wrightsville and where it went in the opposite direction.  We assume the line went to York and then continued south to Baltimore.  Was this line operational during the Civil War or after that?   When was the railroad line discontinued?

“Do you have any information to satisfy our curiosity?”

I responded by referring her to Scott Mingus’ Cannonball blog, where a post about a Stony Brook woman tells a lot about the railroad that ran from York to Wrightsville. That line was part of the Northern Central Railway system (now the rail trail) that later became the Pennsylvania Railroad.

It was the railroad that crossed the covered bridge that was burned to stop the Confederate advance cold. There’s a little museum in Wrightsville that covers the Battle of Wrightsville and the burning bridge.

I added that there was also a trolley line that ran from York to Wrightsville, not to mention the old Lincoln Highway. So York and Wrightsville were well connected.

Some might have the idea that York countians were isolated in the past. In many ways, we’ve always been near everything – a bit of a hub to older, bigger towns. Just still thinking that’s our best brand: York County, in the middle of everything or suchlike … . Thoughts? Please comment below.

A lot written on Wrightsville and the Civil War, and the railroad is often a part of those stories. Check out Scott Mingus’ searchable Cannonball blog or this blog’s Civil War category. 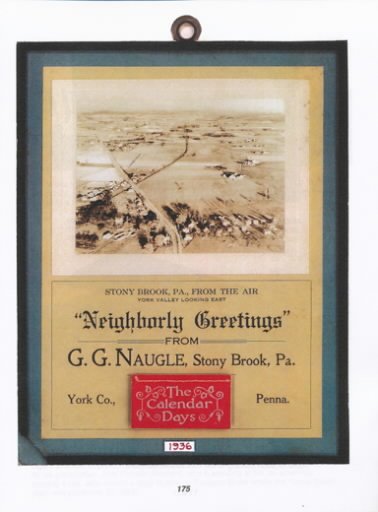 The York-Wrightsville Railroad cuts from top to left in this calendar photograph, crossing under Route 462, the old Lincoln Highway, at Stony Brook. Today, the old Stony Brook humpback bridge is gone and the runs across the tracks. Also of interest: Fill ‘er up at Naugle’s in Springetts and receive a free plane ride.