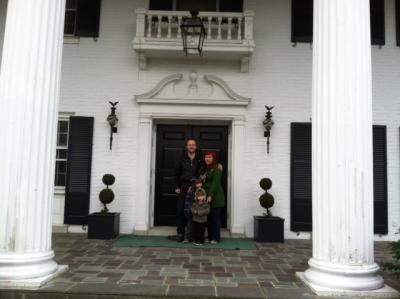 The former Wyndham Hills home of the late Stanley Mailman of Mailman’s Department Store was purchased recently. The fact that the home has new owners caused much discussion around York. The home is a Spring Garden Township landmark, and the 4,400-square-foot home sold for a relatively low price: $275,000. Among other things, the selling price points to the affordable housing available in York County and a reason why the county has been one of the fastest growing regions of Pennsylvania for years. Here, new owners Christopher and Josephine LePant and their two sons stand outside the former Mailman home.  ‘After 42 years of memories in our family home, the torch passes to a new generation of owners,’ Carla Morgan, Mailman’s daughter, told the York Daily Record/Sunday News. For a story and a link to more photos of the home, see: Mailman. Also of interest: Retailers in York, Pa., in late 1960s hedged bets on downtown by opening suburban stores.

In fact, he has some Boring tables in his family:

“I enjoyed your story about the Boring Furniture Co. of North York.  I still have a Octogon Commode Table made by the Boring Co.  I believe that my son has two end tables made by Boring.  These three tables were a wedding gift from my parents.  My dad worked for the Borings at the time and I believe he got them directly from the company at an employee discount.  My dad was friends several of the Borings.  In fact we moved next door to George Boring on North Duke St. in the early 1950s when I was about four years old.”

If you have other Boring Furniture (upper case) tales to share, please comment below or email me.

New Year’s delicacy: Many people know that sauerkraut and pork is a Pennsylvania Dutch delicacy this time of year. But did you ever consider hog maw? (I wouldn’t but many people do.) Check this out: Helpful York County cooks come forward with their time-tested hog maw recipes.

Those annual holiday events: Check out the York Daily Record/Sunday News story and video about all those oversized objects used to celebrate New Year’s – a White Rose, pickle and cigar. And the related post about how Emigsville celebrates Christmas.

Recommended blog post of the day: Buffy’s World profiles the best of blogs of the week: 1937 Christmas song card to a look back at 2011 to Tim Tebow and the joys of living in York.

Forum of the day: York County is getting a new Court of Common Pleas judge via the unusual route of appointment, and Exchangers are controverting the process.