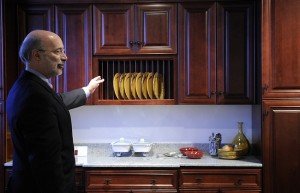 Tom Wolf is a respected York County business leader and the most prominent member of the family that long ago loaned its name to Mount Wolf.
He observed his first year as Gov. Ed Rendell’s state revenue secretary in February 2008.
The York Daily Record/Sunday News recently interviewed the 59-year-old Wolf on topics that ranged from an appearance on the evening lottery broadcast (his office oversaw the lottery) to reports that he will make a bid for Pennsylvania governor.
That interview follows:

Q: What does the Department of Revenue do?
A: The state has money coming in and money going out. The state treasury handles the money that goes out. The Department of Revenue handles the money that comes in. From various sources, that money totals about $33 billion, which would make the Commonwealth of Pennsylvania one of the largest companies in the world if it was a private enterprise.
The department has three main functions:
— collecting taxes;
— running the state lottery;
— coming up with revenue projections for the next year, which members of the state legislature use in their budget calculations.
Q: What role does Wolf see himself playing?
A: Wolf said the department has a lot of very dedicated people who are very good at their jobs. He doesn’t want to interfere with that.
“The job of the top person is to set the broad agenda,” Wolf said. “That’s my role I saw in the Wolf Organization, and that’s my job here.”
Wolf said he doesn’t drive a state car, and pays his own expenses. By statute, he said, he has to take a salary of $130,000, but he donates it back to the community.
Q: Was it difficult making the transition from private enterprise to a state agency?
A: Not difficult so much as daunting. When Gov. Ed Rendell first asked Wolf to step in as secretary of revenue a little more than a year ago, he agreed. That night, Wolf woke up in a cold sweat.
At his family business, Wolf started out mowing vacant lots. While he was earning his college degree, then his Ph.D., he was also driving a truck and forklift and working as a sales clerk for the family business. By the time he took over the business, he knew it inside and out.
But he knew nothing about the Department of Revenue.
So Wolf set himself a goal. He would meet and talk with every department employee – 2,300 people. But Wolf has persisted, talking to them informally about the department’s operations. By the end of this month, he expects to meet his goal of talking to everyone. In the meantime, he’s learning a lot.
Q: What are Wolf’s major goals?
A: The department is working on several major projects right now.
· It is looking to expand the base of retail outlets that sell lottery tickets. At the start of the Rendell administration, about 7,000 outlets were selling lottery tickets. That number has expanded to about 8,500. It is also adding new games and recent additions tie into the popular TV shows “American Idol” and “Deal or No Deal.”
· Updating the department’s technology. Some of the computer programs the department uses are 30 years old.
· Making sure that games such as “Powerball” and “Cash 5,” which are big money makers, have high enough jackpots to attract lots of players.
Q: What’s he been doing lately?
A: Rendell unveiled his $28.3 billion budget last month. In addition to attending public meetings around the state to help explain the spending plan to the public, Wolf has been attending hearings before members of the state House and Senate to explain and justify his department’s projected budget.
Q: What does Wolf think people don’t understand about the lottery?
A: Some people criticize the lottery on ethical grounds. The way Wolf sees it, the lottery isn’t much different from bingo and the charity raffles that community groups have as fund raisers. It’s just on a larger scale. And in the lottery’s case, the proceeds go to programs that benefit older Pennsylvanians.
Q: What was Wolf’s most harrowing experience as state secretary of revenue?
A: That would be Jan. 7, when he appeared on the evening TV broadcast to work the lottery number machine.
Ordinarily, the broadcast takes place at a TV studio in Harrisburg. But this was the special annual broadcast from the Pennsylvania Farm Show.
Wolf said that while the broadcast itself takes only a couple of minutes, it takes hours of preparation. Lottery officials weigh the balls to make sure they’re not rigged. They also conduct a series of tests to ensure that the balls are actually coming up in random order. Witnesses, including CPAs, are on hand to make sure that everything’s legit.
Wolf said that he was obliged to rehearse 17 or 18 times, so he wouldn’t fumble anything while working the machine or displaying the pingpong balls during the live broadcast.
“That was a lot of stress,” Wolf said.
Q: Is there any truth to rumors that he’s considering a run for governor?
A: “I am not running for governor now,” Wolf said. At the moment, Wolf said, he’s focused on his job as state secretary of revenue.
“When and if I decide to do something different, I’ll resign from this position,” he said.

(The answers are paraphrased, except when quotation marks indicate a direct quote.)
Additional background posts: Strange pairings could help raise funds in York and List of luminaries with Dover links lengthens.